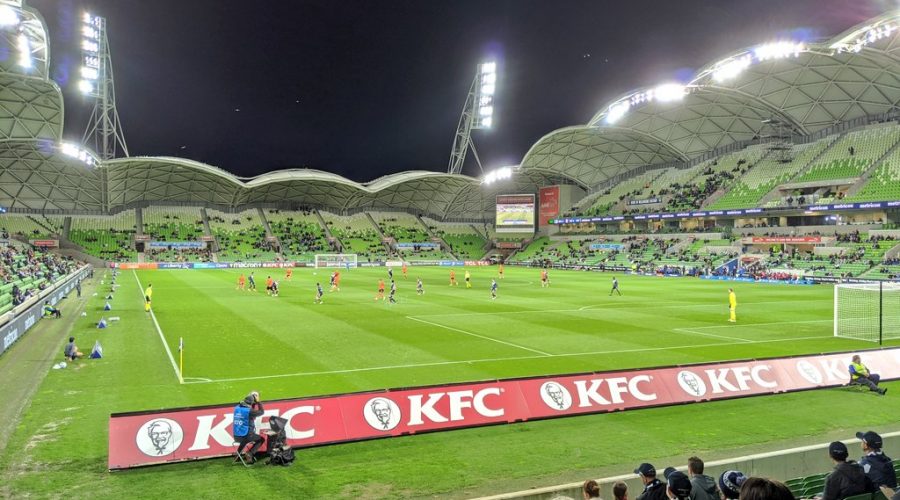 On a chilly Melbourne night I hit the ground and ventured out to Melbourne Victory’s mid week Tuesday night A-League match against the Brisbane Roar at AAMI Park.

While the game finished in a 0-0 draw, it was still a very entertaining match.

It’s always a nice quick walk or tram ride to the ground here and takes about 15-20 minutes from the top end of the city by foot or about 10-15 minutes on the tram from Flinders Street Station. It is just outside the free tram network so it’s advisable to walk or cycle if you can. There is motorcycle and cycle parking around however while be careful, while walking into the stadium outside concourses, a motorcycle mounted the kerb and nearly crashed into me while trying to park without looking and without any stadium management of these motorcycles. I asked a staffer about this and they said that the bikes just come up and park at will. I had not seen them park like this before so will keep my eyes peeled next time while walking along the outside concourse.

I had a really nice chat with a stadium staffer called Catherine/Katherine outside the ground who was so jovial and had superb customer service skills as she helped fans with information on the match one on one and also over her loudspeaker. I mentioned I was down from Brisbane and she said that they had multiple QR vaccination and check in posters who those who needed them so that sounded like they had prepared well for all events.

The check in and vaccination process was easy and seamless and the staff were also kind, helpful and respectful and it appeared that fans were also being respectful back to them. I checked the hand sanitiser stations around the ground and every one I tried worked and had sanitiser in them as well. The toilets were also spotless and well maintained throughout the night.

Many F&B outlets were closed however since last visiting it did seem that there had been some good improvements with craft beer from 4 Pines (CUB non IBA) and a fish and chip stand that looked like it was offering really decent sized portions of quality items. The usual other items were also on sale with items including hot chips ($6), pie ($5) and hot dogs ($5.50) while beers were priced from $8.20 (light beer 375ml Cascade Light poured into a schooner 425ml) to $9.80 Great Northern and $11.80 for a Balter Captain Sensible (mid strength) or a 4 Pines Pacific Ale (full strength – unsure or if mid version of this SKU). I did the maths and it does appear that it is cheaper to buy mid/full strength beers than it is to buy the light beer by only a few cents and I did think that it was slightly cheeky that the light beer was only 375ml and not a schooner 425ml.

Lines were moving fast and staff were helpful and working fast for fans while there was also a coffee cart selling snacks like hot jam doughnuts. There was a point of difference in the quality of the food servings as well with buttermilk chicken tenders and chicken schnitzel burgers as well as fresh sandwiches on offer all ranging from $9.50- $17.

The entrance into the ground through the gates with my QR code ticket was seamless and I was greeted with a hello and welcome which always gets the night off to a good start. Now with 2-3-4 waves of entry with security screening, wanding, vax and check-in checks plus ticket entry its so important that staff are trained in not only their role but also in offering superb customer service. They are often the first point of contact for game day on the fans journey to the event so a nice welcome goes a long way for fans to get the night off to a positive start.

The concourses were clean and staff were friendly and helpful when I asked questions about the venue on my way around taking in the game day vibes. The Melbourne Victory fans really built up the atmosphere with their songs, chants and enthusiasm and it was a credit to them for the atmosphere and noise they created on the night. The players also made sure to come round to the fans after the 0-0 result to thank them which was good to see.

I thought that the community partnership with the TAC was a good idea and offered fans some fan engagement through a good community message around avoiding drink driving and planning their exit from the game. They had these cards that you could scratch off to win prizes and were giving them out to families plus merchandise to young fans.

The high police presence was very off putting and confronting. I asked Police and stadium reps why the large presence, especially on a Tuesday night during school holidays and while staff were friendly and positive about it being due to previous incidents, VIC Police were rude and came across as unhelpful and agitated, which in terms of first impressions for a fan is really not the best look.

Overall, for a Tuesday night mid week match it was really good to get back to AAMI Park and take in a Victory game. I highly recommend coming down here to check it out.