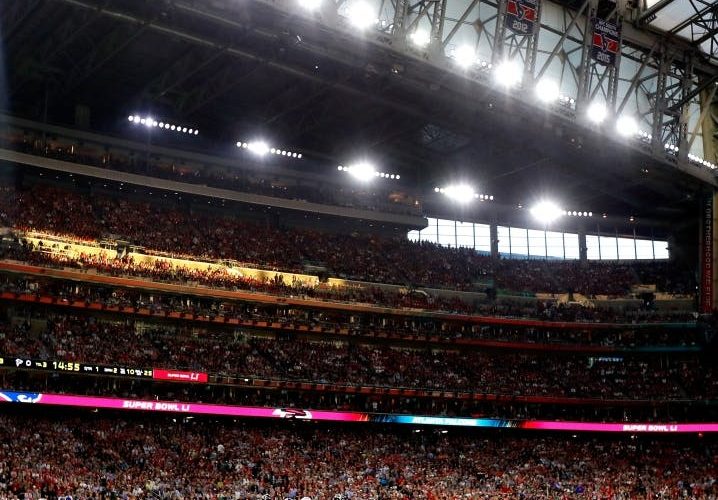 Only the Olympic 100m final and Fifa World Cup Final can compare to the prestige of a Super Bowl. From the half-time shows to the ads and the classic battles through the years, the NFL’s showpiece game is indisputably one of the world’s greatest sporting events. For Super Bowl 51, I joined 70,000 fans at NRG Stadium in Houston, Texas, to review the fan experience and see how it rates for a first-time attendee like myself.

Transportation
It was hot, humid and overcast at midday in Houston when my Uber driver arrived at my downtown hotel ready to take me to NRG Stadium. The eight-mile journey to the 15-year-old stadium was a quick and cheap $9 ride that set me down in a massive dedicated Uber drop-off zone outside the stadium perimeter.

While fans were able to utilise public transport from downtown Houston via the light rail train, park at the ground, or drive and park near the stadium at a cost of $40-$100, it was clear that the ride-share option would be the best way to get to and from the stadium for a major event day like this. Furthermore, as I made my way back across to the Uber pick-up zone at the end of overtime I found that this process could not have been any more seamless. Uber provided me with a pin number to give to my driver along with free cans of ice cold Pepsi and free Wi-Fi should fans have needed it to request their ride home.

Incredibly I was out of the stadium precinct within 10 minutes of the game ending and back at my hotel within 30 minutes, which was one of the fastest and most painless transport experiences I’ve had in exiting a major sporting event. What was also interesting to note was that over the course of the weekend I did not once encounter surge pricing and, having talked to staff, it became evident that Uber had brought in some 5000 drivers from as far away as Dallas and Austin so that fans were not hit with the surge feature.

Security
Security was very tight when the gates opened at 1pm with Army Blackhawk choppers in the air controlling a 30-mile no fly zone above the stadium while sniffer dogs, FBI agents, event security and Houston Police officers patrolled the zone outside. As per the stadium’s restricted items list and security screening process, the only bags that could be brought into the stadium were to be small and transparent so it was good to see helpful stadium staff handing out free bags for fans to transfer their belongings into. The screening process was professional as fans with tickets worth anywhere from $1-10,000 were asked to line up and pass through four winding rows of barriers before being directed to either a male or female security staffer for a full body pat down.

Having received a pat down and wand scan that the TSA would be proud of I was greeted by a friendly ticket officer who welcomed me with superb customer service to the stadium, scanned my ticket and wished me a great day at the Super Bowl. The line to get into the stadium only took 15 minutes and the staff at the fan services stand were helpful and knowledgeable, answering my questions regarding seat directions, Wi-Fi information and fan engagement activations.

Fan engagement
As soon as I entered through the gates I was able to pick up a free rally towel, a pack of skittles, a Snickers bar and some Bud Light sunglasses from the event’s various sponsors. There were also opportunities to take photos with Instagram-like cut outs and other Super Bowl monuments scattered liberally around the venue. Later on when I made my way to my seat I found that an American flag was tucked into the cup holder next to every seat in the stadium to wave at kick-off.

The ‘GameDay Fan Plaza’ was open inside the stadium from 1-4pm and was a mix of live music entertainment, photo opportunities with the Vince Lombardi trophy and cheerleaders as well as a fun ‘Fan Mail’ area where fans could write a message on a postcard which would be sent to a recipient anywhere in the world. A simple and clever idea, although it will be interesting to see if the postcards I wrote to my parents and my girlfriend actually arrive in Brisbane and Melbourne respectively. You might have thought this was an opportunity to grab fan data but email addresses were not requested and the postcards were hand-written without a digital element.

Further fan engagement included fake tattoo stations, marching bands, gospel choirs, interactive games and opportunities to win prizes and the experience was enhanced by the innovative use of the free Super Bowl 51 ‘Fan Mobile Pass’ app. Fans could use this app to check in at fan engagement activations and sponsor stands and scan their personalised QR code in order to win prizes and giveaways, participate in interactive games and have curated content delivered to them along with maps and other event information like game statistics.

Inside the stadium and during the half-time show fans were encouraged to use the torch on their phone at a precise moment during Lady Gaga’s epic 13-minute montage while the stadium’s crystal-clear-resolution screens, the second largest of their kind in the world at 15,000sq feet, showed an interesting ‘Selfie Race’ that featured fans in the stadium racing around an NFL-themed circuit.

At different intervals during the game both sets of cheerleaders performed while the teams’ rally cry videos played on the screens. The visuals also encouraged fans to ‘Make Some Noise’, ‘Get Loud’ and featured in-game stats and various crowd shots of fans. A billion-megapixel photo was taken of all of the fans before the game got underway while the Houston Super Bowl digital crew utilised various social platforms to engage with the Super Bowl audience. Snapchat’s Spectacles and Facebook Live were the best for content due to the ‘in the moment’ and immersive factor. The #SBQuestions hashtag from the official @HouSuperBowl account also proved useful for fans who needed help with event information.

Concession offerings and toilet provisions
It was quite a shock to see some of the outrageous prices at the food and drink outlets inside the air-conditioned stadium considering the food truck offerings outside had all been set at around the $10 mark. The concession varieties were abundant in supply and quality with items on offer including staples like hot dogs ($8), burgers ($13), nachos ($12) and pizza ($10), to frozen yoghurt ($8), baked potatoes ($13) and craft beer from local Houston brewery Karbach Brewing. However, some food and beverage offerings were incredibly expensive. $12-14 for a beer, $11 for a soda and $30 for a double shot lemonade was pretty steep, while a combo of a hot dog and soda or beer was $24 and $25 respectively. Fans who opted to be the designated driver in their party were said to be able to sign up to receive a free soft drink to circumvent the steep prices, yet when I tested this out at four of the stands, it was stated that the offer was not available on the day.

Having talked with various staffers on different food stands the consensus appeared to be that these sort of exorbitant prices were just to be expected at a major event such as a Super Bowl however it did leave a dent in the back pocket. The ridiculous pricing discrepancy between SB51 merchandise sold in the stadium – where prices were jacked up to over 25 per cent more than the exact same items on the NFL website – also left a bad taste in the mouth.

The toilets were clean and adequate in number throughout the stadium and the lines for both food, drinks and restrooms were short and easy to access in the lead-up to the game. Yet within 30 minutes of kick-off when I went down to grab my second $14 beer, the concourses were extremely busy and queuing for food and drinks became trickier. Roving mobile beer and food carts both inside and outside in the stadium precinct made grabbing items quicker. There were ATMs in number throughout the stadium although these charged $4.25 per withdrawal. Mobile phone charging stations were positioned in the venue but only worked for those with US mobile numbers, as this was required to open and lock the charging slot.

Wi-Fi connectivity
NRG Stadium provided free Wi-Fi with no sign-up page under the SBFans network and this was easy to access and was very fast to use for live streaming and uploading all day. The only time it did prove difficult to get online was just before the kick-off and during the half-time show, which is only to be expected, even at the most technologically advanced and connected global venues. I ran speed tests over the course of the day and the Wi-Fi held up very well when I went live on Periscope and Facebook. Interestingly Periscope was not blocked and I was able to live stream some of the game via my seat to my Twitter followers. With Facebook Live I was told that there was zero lag time between the TV coverage and my live video which again proved that the Wi-Fi connectivity held up very well.

The NFL’s Super Bowl 51 at NRG Stadium was an exceptionally well-orchestrated event that showcased global best practice in fan engagement and venue management. Stadium connectivity, in-game entertainment and sponsor activations were as good as anything you could expect at a sporting event. However, if I had a quibble it would be with the exorbitant prices. Of course the event should take its place on any self-respecting fan’s bucket list but given that fans were rumoured to have spent so much on tickets, they probably didn’t appreciate the mark-ups on food and merchandise when they made their way into the stadium.

Ease 10/10 Finely orchestrated transportation system with ride sharing being the real winner on the night. A free ice cold Pepsi and an $11 ride home in an Uber was simply outstanding.

Value 7/10 This is a world-class event that excels in fan engagement and event management but extremely high food and beverage, ticket and merchandise prices diminished a sense of value. THAT comeback and the first ever Super Bowl to go into overtime go some way to making up for the $14 beers but there is a limit to the patience of fans.

Recommendation 9/10 Who wouldn’t want to watch the Super Bowl live? A once in a lifetime opportunity to see one of the biggest sporting events in the world.

Organised by the NFL (National Football League) and the Houston Super Bowl Committee, the annual championship game is the culmination to the regular NFL season and in 2017 was hosted in Houston, Texas.

Price of a bottle of beer: $12-14
Price of a coffee: $6
Price of a burger/sandwich: $10-13
Time taken to be served: Immediately during pre-game and up to 15 minutes five minutes before the game started.
Queues for toilets: None seen in the lead-up to the game however 15 minutes before the game started, lines of 20-plus were seen in various rest rooms which was clogging up the concourse on level 6.