The price is not right: how much is too much for a beer at sporting events? 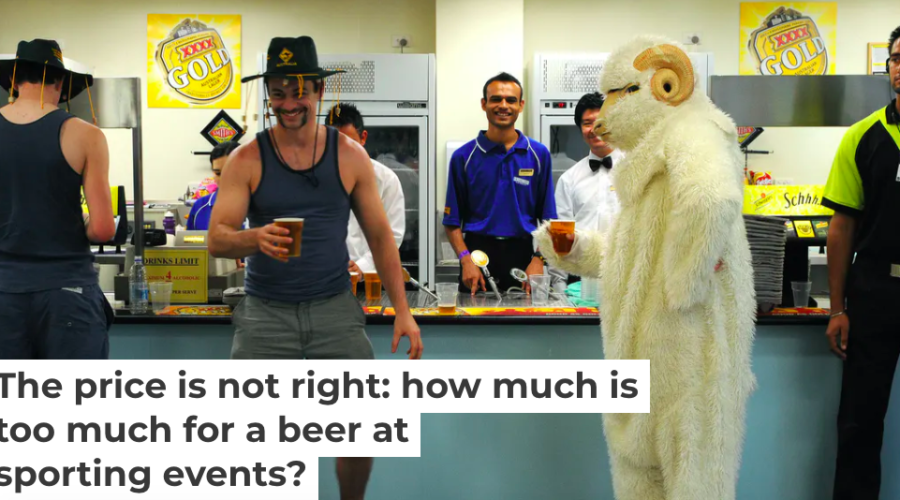 The authors do not work for, consult, own shares in or receive funding from any company or organisation that would benefit from this article, and have disclosed no relevant affiliations beyond their academic appointment.

Western Sydney University provides funding as a member of The Conversation AU.

We believe in the free flow of information

Republish our articles for free, online or in print, under Creative Commons licence.

For many Australian sports fans, buying beer at sporting venues is an exercise in subjugation. For starters, the alcohol content for those in general admission is often capped at mid-strength – a typically penal restriction aimed at civilising the riff-raff.

Yet the true indignity arrives right at the dreaded moment the attendant rings up the till. By the time you have handed over the cost of a round, you’ve just paid for the better part of a three-course meal at a decent restaurant.

Fans at the 2014 football World Cup in Brazil were able to buy a local Brahma beer for as little as R$10 (A$3.97). Yet not only are the Germans football world champions, but their elite Bundesliga leads the way in beer prices. The average cost of a beer in the league is less than €4 (A$5.59).

Elsewhere in Europe, a pint of beer costs on average £3.99 (A$6.76) at English Premier League venues. Yet fans in Australia can be held to ransom if they want to enjoy a beer at the footy or cricket.

Ahead of this year’s third cricket Test, the Adelaide Oval was criticised for planning to raise its already high price of beer to A$9.20. Following public pressure prices were held at A$8.90 (for 425ml).

However, beer at Adelaide is better value than Domain Stadium in Perth, where $8 only buys 330ml of beer. Compared to the average price of beer in Australia ($6.44 for a lager) it is clear that stadium prices are at a premium.

Different serving sizes can often mask higher prices, making it hard for a fan to tell if a $5.40 Carlton Draught at the MCG is better value than paying $8 for a Carlton Mid at the SCG. Stadiums may boast that their beer is cheaper than another – but such claims can be misleading, and fans can be exploited.

Exchange rates make global price comparisons even more difficult and leave fans at the mercy of stadium operators. But, surprisingly, when beer sizes and prices are standardised, Australian venues don’t fare too badly.

Although Australian stadiums don’t measure up to some of their European counterparts, beer is generally cheaper here than at North American venues. Ahead of the pack in this beer swindle are the Philadelphia Eagles, which charge US$8.50 (A$11.50) for a 12oz (355ml) beer.

The food and drink served at stadiums have long been a point of angst for sport-mad Australians. Research shows fans are not satisfied with the price, quality and service of this element of the fan experience. They are frustrated by the limited options of weak, poor-quality beer at stadiums.

Overseas stadiums leave many Australian venues far behind when it comes to choice. Australian fans may drink large quantities of beer at games, but they are increasingly looking for higher-quality offerings – and craft beer in particular. Craft beer consumption is increasing in Australia, but the trend is yet to infiltrate Australian sport.

Throughout the US, however, it is standard to find five or ten locally brewed and independent craft beers on tap at major venues. For example, Major League Soccer (MLS) side Sporting Kansas City has Boulevard Brewing on its concession stands. And the Tap Room public bar at Miami’s Hard Rock Stadium features close to 50 craft beer options from across Florida.

Closer to home, Wellington’s Westpac Stadium has partnered with local brewery Garage Project to feature its range of craft beers along with a rotating selection of New Zealand craft beers.

Technology is playing a part in the push for implementing craft beer.

Dodger Stadium in Los Angeles created a special, technologically advanced, ice-cream-type foam that sits atop beer cups to keep it ice-cold for longer. And self-serve beer vending machines are on the rise throughout American stadiums to serve both quality beer options while cutting down the time fans are away from their seats.

Collaborations between teams, stadiums and craft beer breweries are on the rise. Teams such the NFL’s Buffalo Bills and MLS side DC United have their own lines of pale ales for fans.

In England, football clubs including Reading FC have called on fans to name their new match-day pale ale. West Ham United’s new ground features two types of craft beer – Boleyn Bitter and Iron Ale. This further highlights the emphasis that stadiums and teams are placing on engaging with fans through quality craft beer.

With falling attendance numbers in many Australian venues, there is a need for an improved fan experience to attract stay-away fans, particularly as sports teams are competing with a growing number of alternative entertainment options.

Given the importance of alcohol to Australians, sports teams can score an easy win by offering more varied and higher-quality beer at games. Fans are irritated when they are continually offered mid-strength beer; they are demanding more for their money.

Australian stadiums should look overseas for innovations in their beer offerings. Here are seven suggestions for satisfying thirsty stadium-goers:

There have been some recent changes to the typical restricted drinks menus on offer. A small number of stadiums throughout Australia are now selling craft beers, but these are still a minority.

After speaking with stadium representatives to gauge the interest in offering local independent craft beer options, many have suggested that fans will soon likely see more availability of locally produced brews, albeit in small quantities to keep pourage rights holders and catering companies happy.

The stadium fan experience is evolving at a rapid pace, with global venues locked in an arms race to improve, revolutionise, and add value to the offering for fans on match days. There is a concerted effort to listen to fans’ concerns and get them out of their home sport caves and into the ground.