On a mild April day in Melbourne I set out for two games in the city with the first one taking place at Marvel Stadium in Docklands at 4pm before heading across town to AAMI Park later in the night.

I started my fan journey to Marvel Stadium in the city by catching the free 96 tram from our accommodation to within a 5 minute walk of the stadium gates. I first walked around the ground taking in the Kangaroos fan zone and members tent area with spin to win games, free GOAL cards and photo opportunities for fans young and old. I checked out the basketball court and the mural as well as some of the Marvel world entertainment like the pillar wraps and the rock climbing Spiderman wall that was not in use today. The walk from Southern Cross Station along the top concourse is always a special moment in Melbourne as thousands of fans make the pilgrimage in to the venue dressed in their guernseys and scarves.

I picked up my copy of the AFL Record and spoke to the seller who said that it’s still selling very well on game days as fans love the physical memento to take home. It’s sad in a way with QR coded digital tickets that we don’t have as many physical items to take from the game anymore like ticket stubs.

The match today was an AFL game between North Melbourne Kangaroos and Western Bulldogs that was scheduled for a 4.20pm bounce as part of the annual Good Friday Appeal match which both teams had worked well on for press all week in the city and thus resulted in a very good crowd. Tickets were well priced with myself being able to pick up a $15 Western Bulldogs ticket via a targeted Facebook post that had no extra booking fees added on as part of the deal.

The COVID check in process was seamless and easy with multiple friendly staff on hand to assist fans. I received a hello and welcome to the venue on entry and found it impressive to see the back of the staff shirts saying ‘Can we help you?’ as well as the IPTV screens displaying similar information about talking to staff if you need anything. I went around to the Customer Service Centre to ask some questions about the game day and found that the staffer here was very well educated on the game day and venue facilities. The hand sanitisers around the ground were mostly filled with one either not working properly or out of sanitiser. The toilets were clean and staff were seen to be doing a really good job of cleaning the venue as the game went on and of ensuring patrons were kept safe especially with the cordoned off roped area when the coaches were making their way back to the stands.

The joint banner and legends kick to kick were clever fan engagement ideas to bring people together for a laugh and a positive moment at the game and there was no doubt that a lot of funds were raised for the Good Friday Appeal.

The F&B options were plentiful with the standard fare of chips ($4.50), pie ($4.50) and hot dog ($6) however the best feature here is the free sauce! Not 30c, not 50c, not even a $1 for sauce but FREE! This might seem small but these things, these little things go a long way for the fan experience not least family budgets when it comes to things like buying food and drinks at a game. I really liked how the IPTV screens displayed the time til bounce and also how you can just pull up and drink a beer or have a bite on the concourse benches that run along the venue facing the field without being ushered on my staff.

There are many quality options to choose from and the pricing is quite affordable too including Smoke and Smouler BBQ, GAMI Chicken and Sweeter Life which was a hit with kids selling lolly bags and popcorn. It was good to see vegan options in burgers as well as gluten free pies making Marvel quite an inclusive venue when it comes to food options.

It was good to see the work the stadium does for accessibility and inclusion with their kids Stadium Sensory Room with sensory bags for kids including noise cancelling headphones, fidget tools, visual cue cards.

I loved the KEG Room I passed which when I ventured further around I thought could be a decent fan social space if you knocked out a window from the inside of it as it had an epic view of the field from up here. On the topic of beers, Great Northern’s were $10.50 while 4 Pines craft beer was $12.50.

Crews were collecting for the appeal while they were also giving out free hot cross buns to fans which was a welcome surprise.

I found it interesting that the inside of the venue had so much Marvel theming around the venue from life size statues to wall wraps and even height charts and photo ops yet they were branded with Marvel characters and not AFL players/themes. Maybe all kids like Marvel characters but I’d love to see an AFL all team character compare your height chart or an AFL footy photo opp booth. I know that the venues name has a lot to do with this but even the fan engagement on field was ‘pose like a superhero’ and not really AFL related.

The atmosphere was really pumping for this Good Friday Appeal AFL match and I was really impressed by the quality F&B on offer, fan engagement from North Melbourne, the team work from both teams media and marketing teams in the lead up to the game, the focus on inclusion and the venues focus on helping fans have the best fan experience they possibly can.

A riveting chat with security personnel and fans from across Australia. 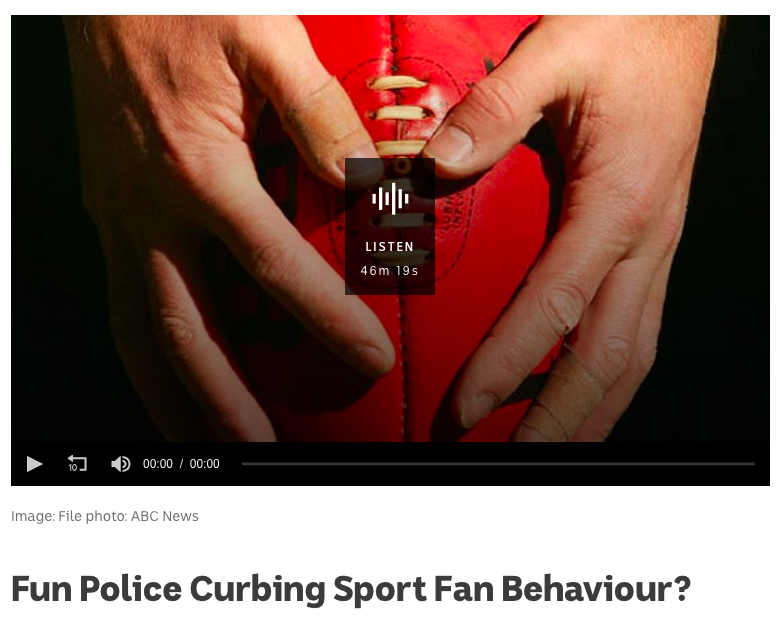