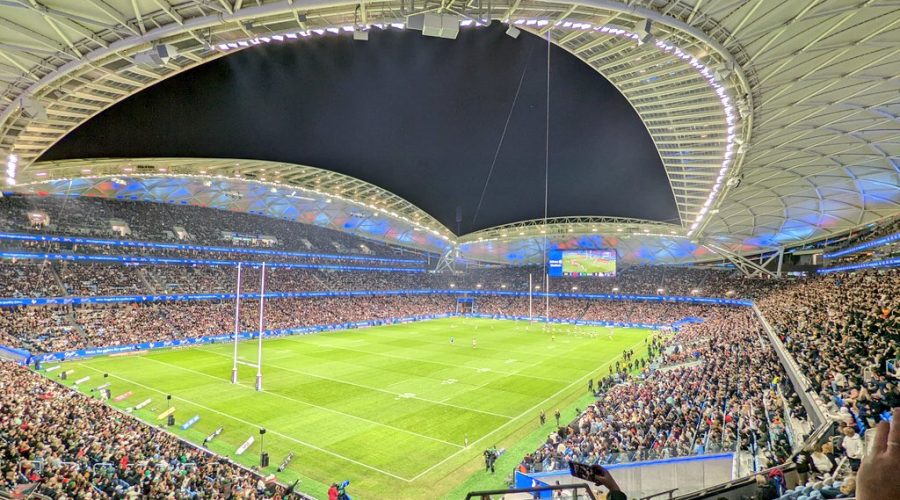 Recent global developments to enhance the match-day experience of fans has seen venues such as Manchester’s Etihad Stadium introducing self-service beer taps for convenience, New York’s Citi Field trialling biometric facial recognition ticketing for entry into the ballpark and Seattle’s T-Mobile Park adding palm scanning technology at their “Walk-Off Market” snack bars to eliminate lines. Further developments have seen trials of in-seat hot dog drone deliveries, weapons detection gunshot localisers and sustainability initiatives like tower gardens, which produce stadium-grown food for use in venue concessions. These are just some of the developments that illustrate the lengths that venues are going to in order to enhance the fan experience and get fans off the couch at home and back into venues in the post-pandemic sports world.

Sydney’s spectacular new state of the art Allianz Stadium is Australia’s latest major venue that has this fan first thinking and the fan experience at it’s core with a raft of impressive modern features providing an exceptional game day experience for fans. In my latest fan experience review here for AUS Leisure, I take a look at the impressive features of the redeveloped Allianz Stadium from the grand opening on September 2nd at the Sydney Roosters rugby league match day to highlight how they are achieving best practice fan experience and the lessons that other venues can learn to improve and enhance their own venue fan experiences.

Starting the fan journey from the CBD to Allianz Stadium in the Moore Park entertainment precinct was a seamless and quick experience via the brand new Sydney Light Rail network that took less than 15 minutes and was free with game day tickets. This free match-day travel to and from the venue could also be used on other public transport modes such as nearby trains and buses while the venue itself features dedicated new electric car charging stations and bike racks as well as only being a short and easy 25-minute walk from the city.

One of the reasons for the redevelopment was that the previous venue provided a poor spectator experience by not being able to cater for different user groups as well as not meeting modern amenity standards around accessibility. It was good then to see that this is certainly a stadium for everyone as there has been significant increases (2300%) to space and seating for wheelchair and companion areas, the addition of gender neutral toilets as well as a 170% increase in female toilets to 600. This represents a commitment to improving facilities for fans in terms of minimising wait times but is also good to see that all fans are being equally catered for especially with the rise of both women’s sport and female attendances at venues.

Arriving early to soak up the atmosphere outside the ground it was evident that a focus on designing clear way-finding solutions had been implemented to enable fans to see where their entrance was. There are detailed, easy-to-understand maps located throughout the outside concourse area, clear signage for gate numbers across each stand along with engaging customer service staff acting as backpack billboards featuring gate entrance and venue information. Heading through the turnstiles into the venue (or when getting a pass out to exit) was seamless and efficient by simply scanning the QR-coded ticket however what really stood out on entry was the pleasant greeting, positive attitude and smile from the staff which has long been identified by fans as one of the most important factors in creating a positive match day experience.

One of the clever features of the stadium redevelopment that fans will appreciate inside the venue is the 360° open concourse. The 300% increase in the public area concourse enables fans to walk around the venue while always staying connected to the game even while grabbing F&B items or accessing toilets or just wanting to see the game from another angle. The four levels of seating that comprise the 42,500 seats are set on a thrilling steep rake, offer clear sightlines of the pitch no matter where you’re seated and are positioned closer to the field of play than the previous seating plan to maximise the atmosphere and fan experience. The noise that was created from fans seemed to reflect back into the seating bowl as a result of the stadium design, which in turn added to a louder and more intense experience for spectators.

The vibrant and unique art design of the seats by Indigenous artist Tony Albert is titled ‘Two Worlds Colliding’ and really makes you feel like you’re sitting right on top of the action while the innovative design of the diagrid roof also sees 100% of the seating area now undercover (up from only 30% previously) to offer weather protection for spectators which again illustrates a commitment to the fan-first vision of the venue. Rooster’s member Alan Katzmann agreed and added, “The stadium is terrific. I sat in the members stand on level 4 west and found it easy to get around with great viewing areas to mingle with friends and I felt very comfortable throughout” while Easts diehard Jane Cook also stated that “the atmosphere was phenomenal as I felt so close to the turf from my seats in the Chookpen members area”.

Designed by Cox Architecture and constructed by John Holland on the site of the original Sydney Football Stadium, the $874m venue transformation was delivered on time and features a host of innovative architectural design elements, exciting active spaces and art for spectators and the local community to engage with that highlight the venue’s iconic architectural identity.

The precinct around the stadium features an accessible open-air fitness space with gym equipment and a basketball court on a visually striking sports surface while there are also sculptures, audio art, a wind-screen and seating areas with historic moments from the ground carved into them that add to the fan experience on game days as well as also being a creative use of public space for the community to utilise all year round. A signature of the architecture are the 980 bronze coloured fins that form an elegant curtain wall surrounding the external façade of the venue while native vegetation has been used to increase shade and reflective roofing has been installed to add a heat mitigation solution to keep fans cool and comfortable inside the venue which further highlights a focus on putting fans and the environment first.

Merivale Group is the exclusive ‘hospitality experience’ partner of the venue and has clearly brought it’s culinary expertise into the stadium with a host of interesting gourmet selections as well as the standard footy fare that is expected of fans. The inclusive design of the menu features over 350 food and beverage options for fans to chose from across 64 outlets ranging from pork belly tacos and veggie burgers to margarita seltzers and independent craft beer from local Sydney breweries while the addition of more F&B outlets, self service ordering stations, a 30% increase in the counter lengths of bars and the use of mobile backpack beer servers all saw service times sped up and queues alleviated to enable fans to get back to their seats.

A highlight of the first match day at the venue was the generous offer for fans that saw 49% off the price of all beverages while F&B prices were seen to be on par with other venues for standard stadium fare with items such as water ($5), hot chips ($5.50) and soft drinks ($4.80) actually being cheaper than other Australian venues. It was also good to see the inclusion of combo meals, non-alcoholic beer and dietary needs being taken into consideration however ‘stadium sauce’ was being sold for the outrageous price of $2.90 in one snack bar (although for research purposes I tried it and it was actually delicious!).

Overall it was clear that the quality and diversity of the stadium grub on show at Allianz Stadium is a step above and puts this on another level in terms of the stadium food and beverage that is currently available in other Australian stadiums.

The Sydney Roosters put on a spectacle on the field for the 41,906 fans in attendance winning 34-6 (NRLW) and 26-16 (NRL) while off the field their fans and members were also winning with sponsors and staff both delivering a spectacular effort in storytelling and fan engagement. Roosters Fan Engagement manager Ryan Chant highlighted that “Returning home to Allianz Stadium provides us with an array of new opportunities to engage with our members and supporters” and this was evident asoutside the ground there were relevant sponsor activations for fan of all ages plus live entertainment while the pre-game build-up featured an emotional scene of two young fans embarking on their journey home to the venue. The hype reel, player entrance and big screen visuals, amplified by the impressive JBL loudspeakers, increased the intensity of the atmosphere while all fans were given free commemorative flags and TRY cards on entry before Aussie band The Presets kicked off the pre-game show with a pumping gig that had fans up in their seats.

The redeveloped Sydney Football Stadium is the result of years of collaborative teamwork amid COVID lockdowns and government restrictions and is a spectacular venue that fans both deserve and should be proud of due to its forward-thinking modern facilities that elevate the atmosphere and puts them closer to the action than ever before.

Allianz Stadium’s fan-first approach has significantly raised the bar on every aspect of the fan experience from accessibility and design to seating and food and beverage and represents a new era in Sydney’s sports and entertainment stage that will create memorable moments for fans, boost the local economy and place the capital in a prime position to attract major international and local events into the future. Put it on your list of sporting game day’s to experience and you won’t be disappointed.

Blair Hughes is an award winning, globally respected fan engagement specialist who helps clients in the sports, music and craft beer industries grow their fan bases, improve fan experiences and create new business and revenue opportunities. You can follow him on Twitter at @MrBlairHughes or at www.MrBlairHughes.com.