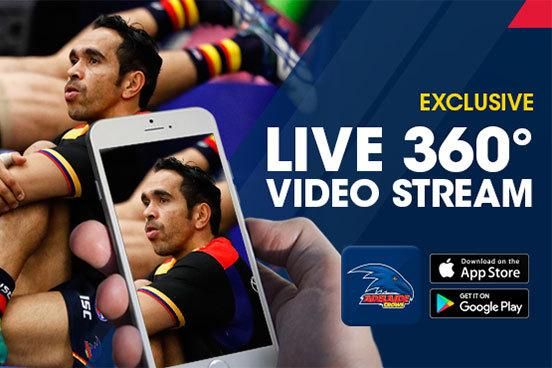 The Australian Football League’s Adelaide Crows have announced another innovative technology advancement that is set to increase fan engagement.

Fresh from announcing their purchase of an esports team in May, the Crows have now set their sights on venturing deeper into virtual reality by becoming the first AFL club to live stream video of the team to fans in 360 degrees.

The Crows worked with both Telstra and Adelaide-based virtual reality studio Jumpgate VR to expand on the previous virtual reality experiences which the club produced earlier in the season. The new partnership brings live streaming from the Adelaide Oval to the club’s app.

Adelaide fans then had the ability Friday night to transport themselves into the inner sanctum of the Crows sheds as the players prepared for one of the biggest battles of the season.

“We will continue to be a leader in this country with the integration and trialing of new technologies that provide our 600,000 plus supporters with unique engagement opportunities that enhance their experience, whether they are at the game or not,” Crows CEO Andrew Fagan said in a statement.

“We are fortunate to have some of the most passionate and loyal Members and fans in professional sport and we want them to have the chance to be a part of the inner sanctum of the Club and interact with the us like never before.”

The finals-bound club first partnered with Jumpgate VR in August 2014 to bring one of the first VR applications to world professional sport with the “Banner Run Experience” where fans were able to run out onto the field through the banner for club legend Ben Rutten’s final game of AFL football.

The club then reenlisted Jumpgate VR to become the first in the AFL to integrate VR into its official app during the home and away season. In a series of VR videos, fans could be welcomed into Adelaide’s cheer squad and see the change rooms and tunnels beneath the grandstands.

Now the Crows are working again with Jumpgate VR, Telstra and app provider Yinzcam to bring this live 360-degree video stream to the club’s app and thus becoming the first sporting organization in Australia to do so.

A significant outcome as a result of the live VR work the Crows produced on Friday night has been the rise in both iOS and Android downloads with these increasing by 67 percent and 45 percent respectively compared to the previous week.