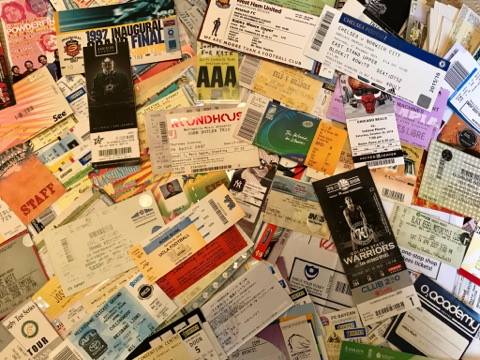 Each week there seems to be a new development in the ticketing space with teams/artists, venues and fans now having access to a wide variety of new technologies which are improving the fan experience.

Having just finished some consulting work for a client in the NFL who wanted to know what were some of the next big and exciting things happening around ticketing I thought I’d provide a quick summary of that research here with a brief post looking at the new advancements in ticketing that fans could see soon at major events.

Summary of advancements in the ticketing space across the course of 2016-17:

Many teams in the US are now offering fans the ability to just purchase concourse standing only passes. An example of this are the Oilers who announced the availability of $80 “Concourse Pass” which let fans get into the Rogers Place playoff games but which featured no seat and no actual view of the ice. By all media reports, fans were only able to watch via TV’s in the concourses. If the demand is there then fans will no doubt pay for these passes.

Some music artists who are fed up with ticketing scalpers are re-selling tickets at face value on their own sites. An example of this is Twickets by Ed Sheeran who supports a site where fans can resell tickets at face value and therefore get a fairer deal and chance to offload tickets or buy them for face value if a gig of his is sold out.

Teams like the Canadiens are now charging fans for paper tickets in an effort to make sure fans are coming into the venue with genuine tickets tied to the actual buyer which aims to address ticket fraud. The team also cited security, ease of use and environmental sustainability as reasons for the change. Some fans won’t like teams doing this even if it is the way of the future as for many the ticket stub is a collectable and special memento of the game they went to. In my own opinion I’m all for whatever venues, ticketing agencies and teams can do to stop ticket scalping and fraud however I love keeping my ticket stubs and have well over 1000 from various gigs and games I’ve been to from 25+ years of music and sporting events. Printed A4 ticket slips and mobile phone QR code tickets just don’t have the same appeal for me as a fan.

Loaded Tickets are being introduced at global stadiums by teams and venue partnerships which have the ability for money to be ‘loaded’ on to their season membership card for food, beverages, tickets and merchandise while at the stadium to enabling ease, a better fan experience and to keep an eye on and control fan spending.

Teams and stadiums are partnering with ticketing agencies to enable fans to be able to see the view of their seat as well as concourse concession options and other facilities like rest rooms and parking before they buy their tickets by having a virtual reality ticketing viewing experience. A good example of this VR feature is the work StubHub and the Nationals did together which allowed future attendees to dawn a virtual reality headset and check out the view from their seats before they even press the “buy” button. Deemed the “virtual view” on StubHub, customers can even use their phone to get a 360-degree shot of their baseball enjoying experience.

Teams like the Miami Heat have only recently announced plans to go strictly mobile only. The Heat announced the plans recently to switch to smartphone-only tickets for home games this season. According to a statement from the team, the new policy is due to the fact that about one in every three fans used mobile tickets to attend games in 2016/17. In the NBA other teams such as the Timberwolves and Cavaliers have also switched over to mobile tickets however these teams still offer the option for fans use a driver’s license and credit card to get into the venue. How do you feel about this as a fan? Would you want to just enter the venue with your phone? Too bad it’s probably going to be the standard in the next five years across the US.

AI is being utilised in the fan ticket purchasing experience by allowing fans the opportunity to purchase tickets by sending a ‘buy’ text message to platforms like ReplyBuy and having chatbots respond with questions asking how many tickets the fan is after and other key ticket information. This is proving to be a new revenue opportunity for fans wanting to buy tickets to games. In recent weeks down here in Australia teams such as the Perth Wildcats (NBL) and Adelaide Crows (AFL) have introduced their own chatbots which I’m sure will develop over time to enable fans to be able to purchase tickets to games through Facebook Messenger.

The ability to enter venues now with just your fingerprints is making some fans breeze through security rather than having to wait in lines to get into the venue. The CLEAR biometric fingerprint technology allows fans to enter the venue gates almost without security screening having already signed up prior to advanced screening like seen for some passengers at US airports. The Colorado Rockies launched this a while back for games at Coors Field and recently Detroit’s Comerica Park was also added to the list of US venues allowing fans to enter this way. What about you though? Do you want your fingerprint data collected? Could there be some big privacy concerns here?

As crazy as it seems, some teams are now offering fans the ability to be microchipped with their ticket or membership information implanted into their arm through a tiny incision of a pill like microchip. The fan then is able to scan their arm at the gates to enter with ease at the venue. One team doing this is Argentine football club Tigre who have launched these implantable ticketing microchips in for die-hard fans. This is something from way left field but I think it’s pretty innovative and I’m putting it out there now, if there’s a team/stadium anywhere in the world that wants a test case for this then I’m 110% in! Just pay for all the flights, accommodation, match tickets and surgery and I’m there.

Innovative new augmented reality technology was utilised to bring match day tickets alive at the most recent Rugby World Cup in England through the use of tech company Blippar’s Augmented Reality technology. The Rugby World Cup 2015 tickets were able to come to life and provide fans with unique activations developed as part of the ticket design. In a first for a major sporting event, the technology allowed fans to create a 3D interactive experience through their smart phones by scanning any Rugby World Cup 2015 match ticket with the app. The fans were then able to unlock exclusive content with England 2015 ambassadors. Having been playing around with a few AR apps recently I expect more interesting AR developments will come into our match day tickets provided some of them stay as a physical ticket!

Teams like the Green Bay Packers are turning social posts from fans into commemorative tickets that feature fans own generated content which is then featured on the match day ticket. The Packers aren’t the first team to do this with other NBA and NFL teams also allowing personalised messages and photos to feature on tickets.

Teams are constantly creating new and innovative marketing strategies to get bums on seats from retro ticket prices to game day merch ticket bundles and the endless variety of US ‘event’ nights however one that stood out recently was the Bucks who announced a special 10-win pass ticket offer which saw fans have access to however many games it took the team to get to 10 wins. Fans were guaranteed a seat to see the next 10 home victories as part of this unique new ticket package, inviting fans to attend the next 10 home Bucks victories for just $149 through the exciting and affordable 10-Win Pass. I haven’t had a chance to follow this up but does anyone know how many games these fans were able to actually get? 11, 12, 15? How many did it take for them to get their 10 wins?

Some ticketing agencies like TicketMaster US are creating a ‘verified fan’ ticketing process which enables fans to sign up and access tickets by completing tasks or buying other items like merchandise. Some commentators see this as a bit hard on genuine fans to have to do this but the idea is that this is cutting out the bots and scalpers and making it a fairer process for genuine fans. Would you complete tasks like sharing a team/artists social posts to then have access to buy tickets? It sure would beat those pain in the butt Captcha’s that keep reloading on ticketing websites no matter how many times you click all the damn street signs or cars!

While in Japan recently I was amazed at the ease of being able to buy match day tickets to a Japanese baseball game from a machine inside a 7/11 store. With a little help from the helpful staffer, the ticket machine which presumably also doubled as a printer, fax, coffee and internet machine was simple to use and allowed me to easily grab a couple of tickets to the game at Osaka’s Kyocera Dome. How about this stadium!

So there ends a quick summary of some of the developments around ticketing and how it’s going to or already is impacting the fan experience. Feel free to throw in some other ideas in the comments and if you’re looking for a creative and enthusiastic problem solver to help you engage and grow your fan base please feel free to touch base with me at @MrBlairHughes and WWW.MrBlairHughes.com.

Blair Hughes is a passionate advocate for fans and an authority in the fan engagement/experience space who consults around analysis, ideation and implementation for global sporting leagues and teams to help deliver creative and innovative fan engagement solutions that grow fan bases as well as increase revenue opportunities. Blair brings a diverse and creative approach to his work as well as a knowledgeable background in adolescent sociology and fan psychology as a result of a career and valuable life experiences gained from the education, sport, music and digital sectors. More information can be found on his website https://mrblairhughes.com/