More Than The Game: Fan Engagement 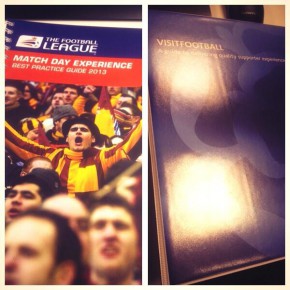 Sporting teams are fighting a battle off the pitch to get more fans through the gates.

The challenging financial climate, competition from new leisure activities, as well as the convergence of digital media and sports over the last few years has seen more and more fans viewing the game from the comfort of their man (or woman) home theatre caves.

Sports fans these days have higher expectations of the live stadium experience. While the football purists proudly still exist, long gone are the days when it was only about the 90-minute game on the pitch. For many fans the game alone is now simply not enough value for their hard-earned money. Therefore sporting clubs around the world are investing more and more resources into fan engagement initiatives in order to give their supporters more bang for their buck, increase fan loyalty and enhance the game day experience in order to create lasting memorable moments for their fans.

In late 2013 I interned at English Championship side Queens Park Rangers football club in London, where I was able to work alongside highly experienced marketing, operations and fan engagement representatives at this famous football club.

My main aim was to explore how global sporting teams – I visited 16 UK teams such as West Ham United, Southampton, Everton, Manchester City and Fulham – engaged and actively communicated with their fans to bring them closer to the match day experience both at the ground as well as in their home via social media.

Two of the leading resources into fan engagement in the football world include the Football League Fan Engagement Guide as well as the Quality Assurance Stadium Scheme Visit Football Checklist.

The Football League Fan Engagement Guide is designed to help clubs grow their fan bases and provides a comprehensive list of ideas and initiatives that aim to improve supporter experiences for existing, lapsed or potential fans. The guide was designed to recognise supporter needs, deliver or add value to existing engagement strategies and create memorable match day experiences.

The Quality Assurance Stadium Scheme Visit Football Checklist developed by enjoy.england.com is designed to reflect the changing match day expectations of fans. It’s a checklist, conducted via a mystery shopper-style assessment, which addresses the supporters experience at every stage of the journey from pre-visit to inside the match and leaving the stadium. Moreover, this handbook looks at pricing, retailing, transport, amenities and much more. The assessment has been developed in order to ensure that fans have the best possible experience at the game as well as ensuring that football is attractive to all sectors of society.

These fan engagement resources feature ideas that had been well executed such as Portsmouth’s stadium sleep over, Cardiff City’s away fan zones (where bar staff wore the away team jerseys) and creative food ideas like Middleborough’s famous ‘Parmo burgers’ and Morecombe FC’s pies – which were so successful that they are now being stocked in Harrods.

The fan engagement initiatives currently taking place in England draw heavily from these resources and include Manchester City’s ‘City Zone’ that includes live bands, picnic tables, food carts and free Wi-Fi throughout the stadium. An hour west away by train, Everton turns the Goodison Park car park into a fan zone on match days that includes FIFA 14 gaming stations, the use of Tag Board as well as having various themed days such as their retro day where fans are encouraged to wear vintage kits. Everton caters to and engages with their older fans by bringing them in on non-match days to play bingo and have a pie and pint in the stadium.

At Arsenal there is a dedicated sponsor driven fan zone outside the Emirates called The Carlsberg Corner. Across town, Fulham has created a post box in their kids zone where young supporters can leave a note about their thoughts on the match.

Not to be outdone, QPR has created a ‘My Match Day Experience’ card for kids to fill out as well as a Matchday Activity Zone for kids in the stadium that is complete with gaming systems, fussball tables, TV screens and activity worksheets for kids to fill out with the community trust staff and their parents.

The importance of valuing fan-generated content via social media was also highlighted by these clubs, who spoke about the increasing need to back fans who create their own content for the club. A simple retweet on Twitter of a tweet from a fan who has created a design can do wonders in bringing that fan closer to the team, as well as showing the greater fan community that their participation is highly valued.

While the majority of fan engagement strategies are aimed at children in order to build lifetime supporters, it was interesting to note from all of these meetings that many clubs were realizing the importance of catering for different demographics. Improving the match day experience for the elderly fans, the purists and the tech savvy millennials is integral to creating lasting memorable experiences for fans at the game as well as in the online world by creating genuine human conversations via social media that connect fans away from the stadium.

Fan engagement is taking off in the sports business. While A-League teams have some creative initiatives such as Perth Glory’s man of the match QR code app, Brisbane Roar’s photographic experience in partnership with CameraPro and Central Coast Mariner’s Superhero themed match, more can be done to continue to make the A-League leaders in terms of fan engagement amongst sporting codes in Australia. The establishment of a fan engagement checklist or stadium quality assurance scheme is vital in taking the A-League match day experience to the next level in Australia.

Words and photos by Blair Hughes.

More than the game: fan engagement