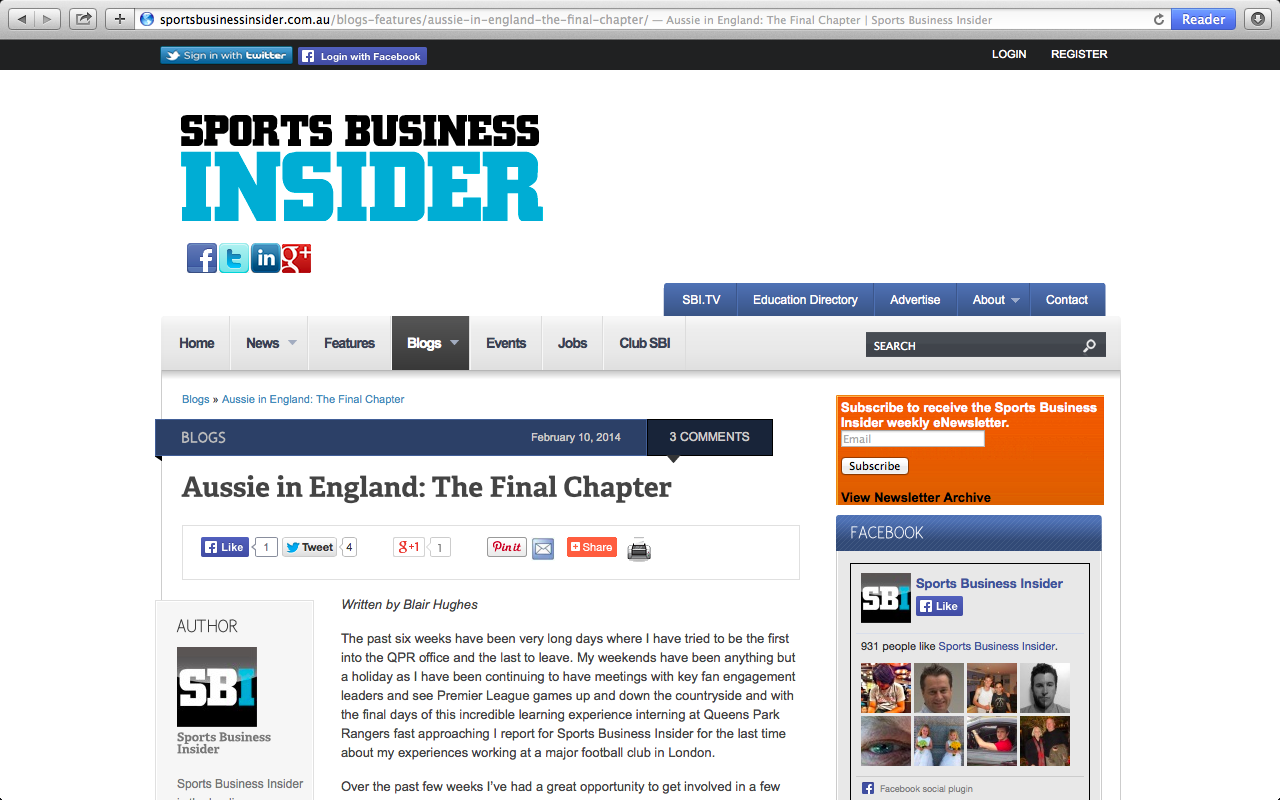 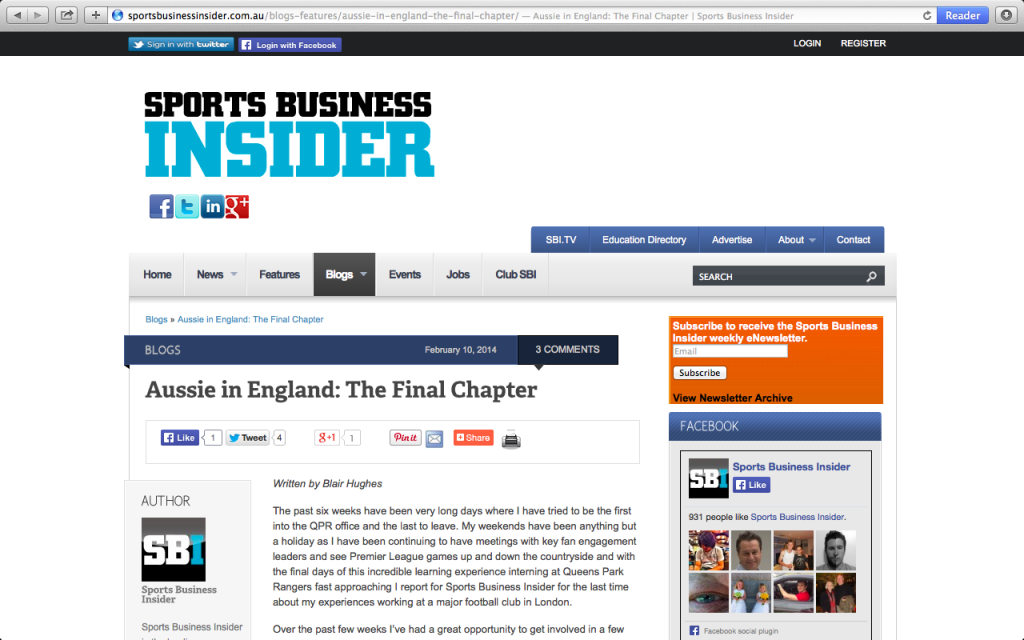 The past six weeks have been very long days where I have tried to be the first into the QPR office and the last to leave. My weekends have been anything but a holiday as I have been continuing to have meetings with key fan engagement leaders and see Premier League games up and down the countryside and with the final days of this incredible learning experience interning at Queens Park Rangers fast approaching I report for Sports Business Insider for the last time about my experiences working at a major football club in London.

Over the past few weeks I’ve had a great opportunity to get involved in a few projects as well as help out with the QPR in the Community Trust which works with members of the local community aged 4-90 and runs projects based around four core aims of health, education, social inclusion and sports participation. In my first day working with the Trust I went out to a local primary school where we ran an entertaining football and fitness training session with adolescent boys that reminded me of how challenging it was to teach London teenagers back in 2008.

During the day I was able to learn about elite player nutrition from the Academy coaches and Community Trust staff who teach emerging local footballers about fitness, nutrition and careers after football. It has been fascinating to see how supportive and passionate everyone at QPR is from the office staff right down to the coaches. At night we went out to a gym around the corner from Loftus Road where we ran a skills and training session for the QPR youth Down’s Syndrome team. The club decks these amazing kids out in full kits and coaches them in football skills and it was really interesting to see how there’s no cliques, no bullying or typical teenager stuff as these kids greet everyone with smiles, hugs and laughs. The Down’s Syndrome kids love the QPR community trust staff and from the smiles on the faces of the parents you can see how much this community work by QPR means to them.

I had a great chance to sit in on a meeting with club marketing representatives from the Qatari Stars League who were visiting clubs in England to see how they could improve their fan engagement. It was a great opportunity to understand where the game is at in Qatar compared to England and Australia but interesting to see that they don’t have mascots and do little in the way of fan engagement due to the stadiums playing host to multiple ‘home’ teams combined with the fact that the majority of their games are played late into the evening due to the extreme heat. As I was working with the QPR Community Trust this week I was decked out in their uniform of a full QPR tracksuit instead of my usual formal attire and half way through the meeting when I was talking to them about the fan engagement in the A-League they stopped to ask if I was a first team player which was quite amusing.

No wonder Blair was asked whether he was a first team player!

In the week after the Doncaster game I was given the opportunity to head out to Harlington which is the QPR training ground near Heathrow with the commercial and marketing team to meet the players and have jerseys, balls and other merchandise signed for charities and competition giveaways. It was a surreal experience to meet these players and coaches who like many of us have watched over the years early in the morning on Fox Sports such as Joey Barton, Bobby Zamora, Shaun Wright-Phillips, Andy Johnson and Harry Redknapp as well as Rob Green who I had a great chat to about his drumming skills as randomly the guy I was staying with in London had taught him how to drum a few years ago. We stayed at the ground for a few hours and were lucky enough to sample the healthy food the players eat which was probably the most nutritious meal I had in my time in London.

Over the past fortnight we’ve had matches against Doncaster and Huddersfield which QPR have won 2-1 on both occasions in some very poor weather conditions of high winds, chilly breezes as well as lots of rain. The Huddersfield game was a good experience to see how the operations team handles a large contingent of away fans. Huddersfield brought 1800 fans to this match, which is also the maximum the Football League allows (10% of the stadiums capacity but this can rise to 15% for FA Cup matches) which is a huge achievement for a club to bring so many supporters down to London. I was able to shadow one of the top stewards for a few hours as we sat through a very professional briefing covering topics such as evacuations, suspicious parcels and pyrotechnics before viewing how away supporters enter the ground. The one at a time through the barricades system, pat down procedure and metal detector scans as well as the management of the ‘risk’ supporters by the Territorial Support Group police (TSG) from train station to the away pub and then to the ground was quite interesting to see. It will be interesting to see how these kind of tactics progress in the Australian game over the next few years.

In the week before the Huddersfield match I was able to attend the bi-annual Hammersmith & Fulham council SAG (Safety Advisory Group) meeting which brings together all of the key stakeholders involved in putting on these major events in the borough. From QPR operations personnel, London Fire Service, Paramedics and Traffic Management representatives to London Metropolitan Chiefs of Police, Local Council officers and Transport Police this four hour meeting looked at all of the issues and factors that impact on matches involving QPR at Loftus Road and was a fascinating insight into what goes on in the planning of these major events.

With the Huddersfield win being my last match in the control room I was treated to some post match drinks with staff and presented with a two signed jerseys, one by the players and one by staff. A truly overwhelming experience that was only capped by getting a chance to share my story with the club’s owner, F1 boss of Caterham Racing and Air Asia supremo Tony Fernandes which was an amazing experience as he is someone who I greatly admire for his entrepreneurialism.

In the space of a few days I had some fantastic networking opportunities and meetings with the head of supporter services at the Premier League offices in Marble Arch as well as supporter liason officers at Arsenal and West Ham United and combined with the chats I’ve had with Manchester City, Southampton and the Chief Financial Officer at QPR it has been really positive to see the amount of women in high profile positions within the UK football business who are also leading the way for more women to get into the sports industry in England.

On my second last day I sat down with a very experienced accountant and financial officer to learn first hand about how the transfer window works. I got a chance to look over a couple of professional top flight football contract templates as well as the opportunity to learn about the FIFA Transfer Matching System (TMS) which is a database of players and ensures transparency in transfer operations.

I was able to learn that players are paid monthly not weekly, a good thourough medical usually takes up to four hours and as odd as it sounds players are paid just like normal staff with hundreds of thousands of dollars going through payroll via netbank transfers. It’s interesting to learn that while scouts, managers and owners all argue over possible targets at the end of the day it comes down to the financial officer who weighs everything up and offers up the best advice. So in future when you hear the media talking up a manager’s latest signing, spare a thought for the financial officers at these clubs who often plays a very big part in the transfer process and signing a new player.

It’s currently 2pm on my final day at QPR and I’m sitting in a corporate box overlooking the Loftus Road pitch reflecting on what I’ve been able to achieve in the past few weeks in London.  There’s plenty of fist pumping and smiles as I think about how proud I am of what I’ve done here by backing myself to set this internship up by trekking across the globe to continue my passion of lifelong learning in order to start a new phase in my life working in the sports business.

I mean seriously to think I was watching QPR live at 1am on Sunday mornings last season and here I am standing on the sidelines reflecting on my time interning here. It is an absolutely surreal dream come true to be able to have interned at a major English football club.  The learning experience that QPR have provided me with is something which I will always look back on with absolute gratitude to everyone involved with the club. The QPR staff have enthusiastically given me full access to the operations and marketing departments in order to learn as much as I can and take that knowledge and experience back to Australia where I hope to land a job at a major sports club. I’ve pushed myself as hard as I could on the internship and have kicked all the goals I set so for now it’s about searching for a sports business role in fan engagement and marketing with a club in Australia or somewhere else in the world.

Thanks for reading these three blog posts over the last few months.