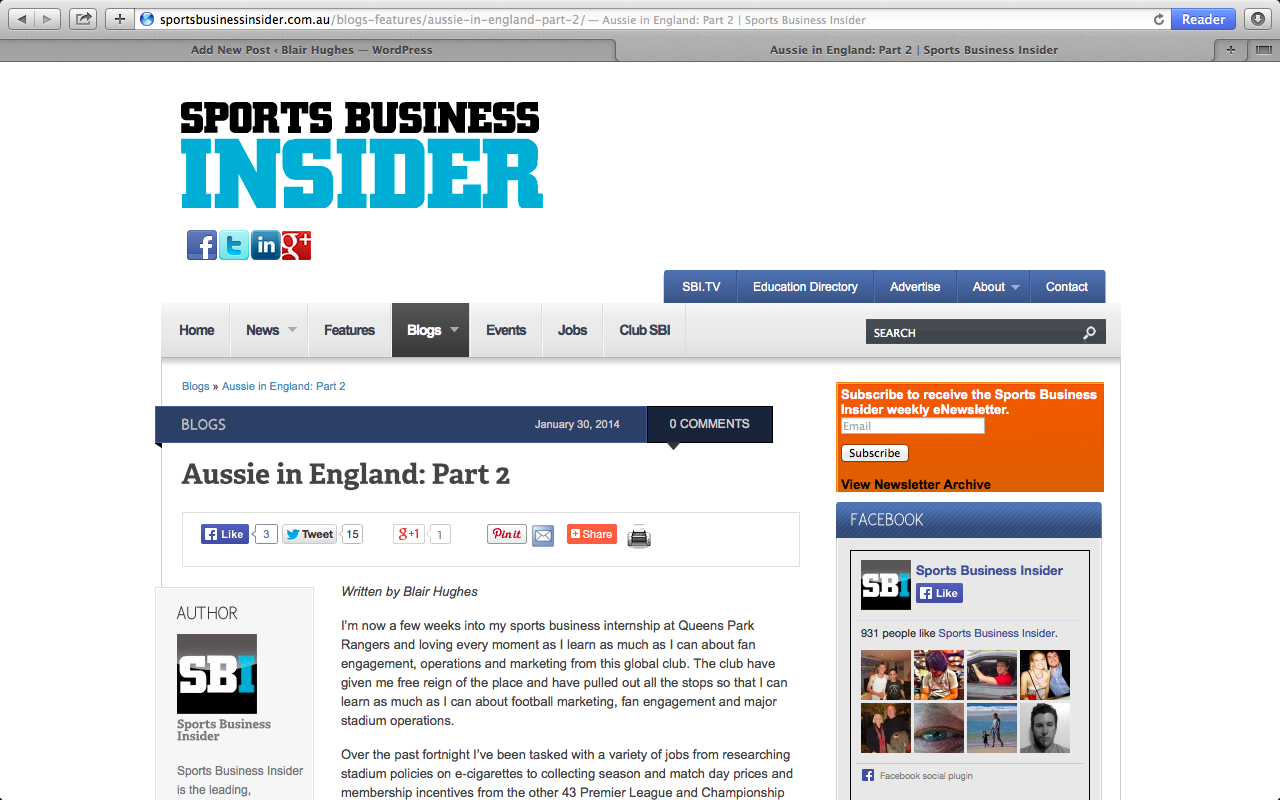 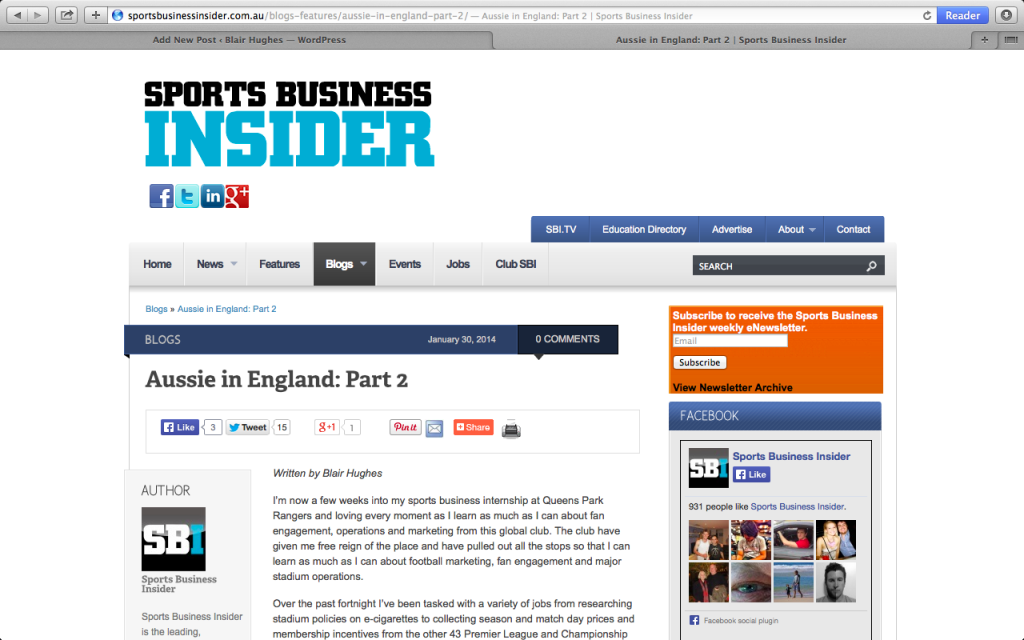 I’m now a few weeks into my sports business internship at Queens Park Rangers and loving every moment as I learn as much as I can about fan engagement, operations and marketing from this global club. The club have given me free reign of the place and have pulled out all the stops so that I can learn as much as I can about football marketing, fan engagement and major stadium operations.

Over the past fortnight I’ve been tasked with a variety of jobs from researching stadium policies on e-cigarettes to collecting season and match day prices and membership incentives from the other 43 Premier League and Championship clubs. It was interesting to learn about ‘vaping’ zones as well as look at all the incentives that these clubs and major teams around the world give their members which in turn I’ll be using to help inform what goes into the QPR memberships for 2014/15.

Its been great to talk up the A-League at every opportunity as well to showcase what teams are doing back home to engage fans such as Perth Glory’s man of the match app and Central Coast Mariners beach zone, all of which both QPR fans and staff have been interested to hear about. Its also been good to hijack the remote on the wide screen TV and make the office watch the A-League live on BT Sport on Friday mornings.

In my first week I sat in on a QPR fan forum where the issues of safe standing were discussed and the supporters were excited to hear about the positive relationship that the Brisbane Roar, Suncorp Stadium and The Den have in terms of their active safe standing zone back home. From the research I conducted its interesting to learn that standing is not a criminal offence however it is a Football League ground regulation and failure to sit down can lead to ejection. I was able to communicate with the Premier League and a few safe standing supporter groups and it’s interesting to see that the safe standing movement is gaining speed here in England however laws would need to be changed first and police, council officers and club reps I’ve spoken to at various clubs agree that that will not happen anytime soon.

A memento from Blair’s experience.

I had the opportunity to sit in on the pre- game meeting where all the departments discussed the upcoming Leicester City match before joining the operations team on match day in the control room. It was a really educational experience joining the ops team, football police division, senior MET police, safety commanders, paramedics and traffic management crew to see how they professionally manage these major events in the stadium via CCTV, radio control and stewarding.

The game was a disappointing result for QPR going down 1-0 but was not without its Anfield cat style moment when a squirrel ran onto the pitch and stopped play for a considerable amount of time.  It was brilliant to see how the operations team handled such a difficult and tricky situation by persuading the little fella off the pitch.

I was able to talk to the Football League and Premier League to learn about the rising issue of pyrotechnics in the game here. I learnt about the current pyrotechnics awareness campaigns and dangers with the use of flares and smoke bombs through the facepyrofacts.co.uk campaign and how kids and women were being used as flare mules in grounds across the UK.

I’ve also had a chance to learn a deeper understanding of hooliganism from chief superintendents of the MET police. It was interesting to hear that when a team plays away they have a few local cops from their area who travel with the away supporters and who relate intelligence and information onto the home teams police and safety commanders. I also got to see how the Territorial Support Group (TSG) complete with armoured vans and guns guide away fans from the train station to the away pub and then into and out of the stadium.

I’ve been able to sit in on meetings and briefings ranging from marketing, football intelligence, pre-game, police meetings as well as learn about away fan issues. I even helped conduct an environmental impact study with Hammersmith council about the impact of football in the Hammersmith and Fulham area while learning that there can never be more than two matches over a weekend in this area featuring Chelsea, Fulham or QPR.

Its now just past New Years and I haven’t stopped going flat out for 21 days. Every day at QPR has been a huge learning experience about life at a major english football club however every saturday and sunday I’ve been trekking across the UK seeing Premier League matches as well as having meetings about fan engagement with clubs including  Manchester City, Aston Villa, Everton and Southampton. I’ve been able to forge lasting contacts at these Premier League clubs while getting to see fan engagement examples at their best including Manchester City’s City Square fan zone with free wifi, live bands and picnic areas as well as Everton’s match day bingo, pie and pint sessions for elderly fans.

It has been a great experience to visit these grounds and meet club reps as well as talk to supporters about fan engagement such as 84 year old Joyce at Villa Park who comes to one game a month as her special treat but whose been coming to see Villa play since the 40′s and 91 year old Doris who I met in Southampton who struggles up the steps with her walking stick at St Mary’s every game but wouldn’t miss the Saints for quids.

At every meeting I’ve handed out my physical business card which is in the form of a football kit that has all of my social media and contact details on it. Its been great to see how well this has gone down when I’ve been networking.

The home games against Doncaster and Huddersfield are just around the corner so there’s been plenty of jobs I’m still working on in the lead up to those games.

A few more weeks to go on the internship and then it’s back to Oz.