How the live sporting experience is being redefined through fan engagement. 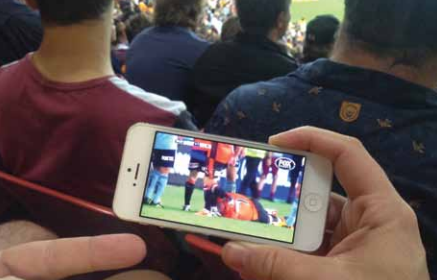 When is the last time those attending a live sporting event at your venue or within your sport truly felt valued, empowered and engaged as fans? Disregard if their team won or lost on the field and think about what’s happening off it and everything else that happened at the venue on the day. Was there a diverse selection of quality food like gourmet pulled pork sandwiches at Wellington’s Westpac Stadium? Was the entertainment exciting like Manchester City’s ‘City Square’ fan zone? Were they able to access free in-stadium wifi on your second screen to connect with the team and other fans during the game like Sporting Kansas’ multi-angle replays and live stats app? Overall, did the fans feel that the club, sport and stadium created a positive relationship through delivering a memorable experience. Hopefully your club, sport or stadium are doing things right and you cheered yes to all of those questions but if not then this is where the sports business ‘buzz’ term of the moment, fan engagement or fan experience has become so prevalent in recent years among leagues, clubs, stadiums and ultimately sports fans.

It’s been well documented that sporting teams across all codes are fighting a battle off the pitch to get more fans through the gates with the reasons often attributed to a challenging financial climate; competition from new leisure activities; a crowded sporting calendar with multiple teams in the same city; as well as the convergence of digital media and sports over the last few years which has seen more and more fans viewing the game from the comfort of their home theatre sports caves on large LCD 3D HD main screens. Fan engagement then is seen as a crucial way that sporting teams can bring their fans closer and at the same time get more bums on seats.

It’s interesting when you actually stop to think about the idea of fan engagement being a new craze when clubs have always been creatively connecting with fans for many years. However, with the advent of the second screen and social media, clubs, stadiums and fans are embracing new technologies which now allow much faster connection on a more intimate level. As a result, a recent study into stadium fan engagement many fans noted that if fans had to choose between leaving their wallet or smart phone at home they would leave their wallet! How then did it get to a point where fans were crying out for a better match day experience and value for their hard earned cash? Surely the game that’s being played on the pitch is enough value for money and the main reason why fans actually attend the game? For some purist sports fans the idea of fan engagement is absurd as they see it taking away from the main reason why everyone has come to the game in the first place. Get these supporters the customary stadium pie, beer and decent seat and that’s all they need to be able to enjoy the match. However, times have changed and for a growing majority, sports fans now have higher expectations for the match day experience and are seeking more options, incentives, entertainment and engagement from clubs and stadiums.

Thankfully for both local and international fans these teams are now rapidly realising the benefits of using creative fan engagement strategies to connect with their fans. The league, club and stadium stakeholders are increasingly finding ways to collect data and create revenue streams from these fan engagement initiatives. There is healthy competition among these stakeholders to have a distinguished fan engagement selling point that separates them from other clubs with not a day going by without an exciting new idea for fans.

It’s important to understand that fan engagement is about creating a special positive relationship with fans through a two-way conversation between them and their club. It’s about reaching out to fans whether they are in the stands at the game or watching for instance via a digital membership in a foreign country in order to make them aware that they are connected and involved in the club through various creative strategies.

Fan engagement is about pulling the fan in closer to the club rather than reducing them to just a membership number in the stands. It encompasses many aspects such as creative merchandise like Queensland Red’s ‘Baby Red’ membership that includes a baby sized jersey; responsive cross platform social and digital media initiatives like West Ham United’s social media match where the team wore T-shirts with fans tweets on them; the Newcastle Knights having fans twitter names on the back of players jerseys. Match day experiences like Tottenham Hotspurs ‘Linesman for a Day’ or the Oakland Raider’s ‘Fanicure’ experience for female fans are also examples of how fan engagement is being used by sporting teams around the world.

Clubs and stadiums also see the benefit of maximising fan engagement by providing quality stadium food options, such as Brisbane’s Suncorp Stadium gluten free stand or Sydney’s Allianz Stadium ‘Seat & Eat Free’ deal, as well as providing fans with dedicated fan zones like Queens Park Ranger’s Matchday Activity Zone for youth supporters and ESPN’s Fan Deck seen recently at the Opening Series of the Major League Baseball in Sydney. While these are just the tip of the iceberg in terms of best practice initiatives for fan engagement in 2014, what sets fan engagement apart is that many of these ideas are very inexpensive and easy to facilitate and in turn can generate significant added revenue into a club by attaching memberships, merchandise, corporate hospitality and commercial offers or incentives to these fan engagement strategies that means the brand can now also be marketed towards newer markets of international supporters.

Global innovations in fan engagement are taking place on a daily basis with recent additions including the FIFA World Cup 2014 rolling out a second screen social and mobile heavy experience called Global Stadium which lets football fans from around the world connect during the 64 games. Atletico Madrid have also recently announced plans to install a massive 4000m2 fan zone around their stadium by 2016 and the AFL has teamed up with wearable technology company Wearable Experiments (We:eX) to develop ‘Alert Shirts’ which allow fans to experience what the players feel through a technology-enabled jersey.

It’s not hard to see why sporting clubs and stadiums around the world are investing more and more resources into fan engagement initiatives as it gives their supporters more bang for their buck, increases fan loyalty and enhances the game day experience which in turn creates lasting memorable moments for fans.

2 comments on “How the live sporting experience is being redefined through fan engagement.”