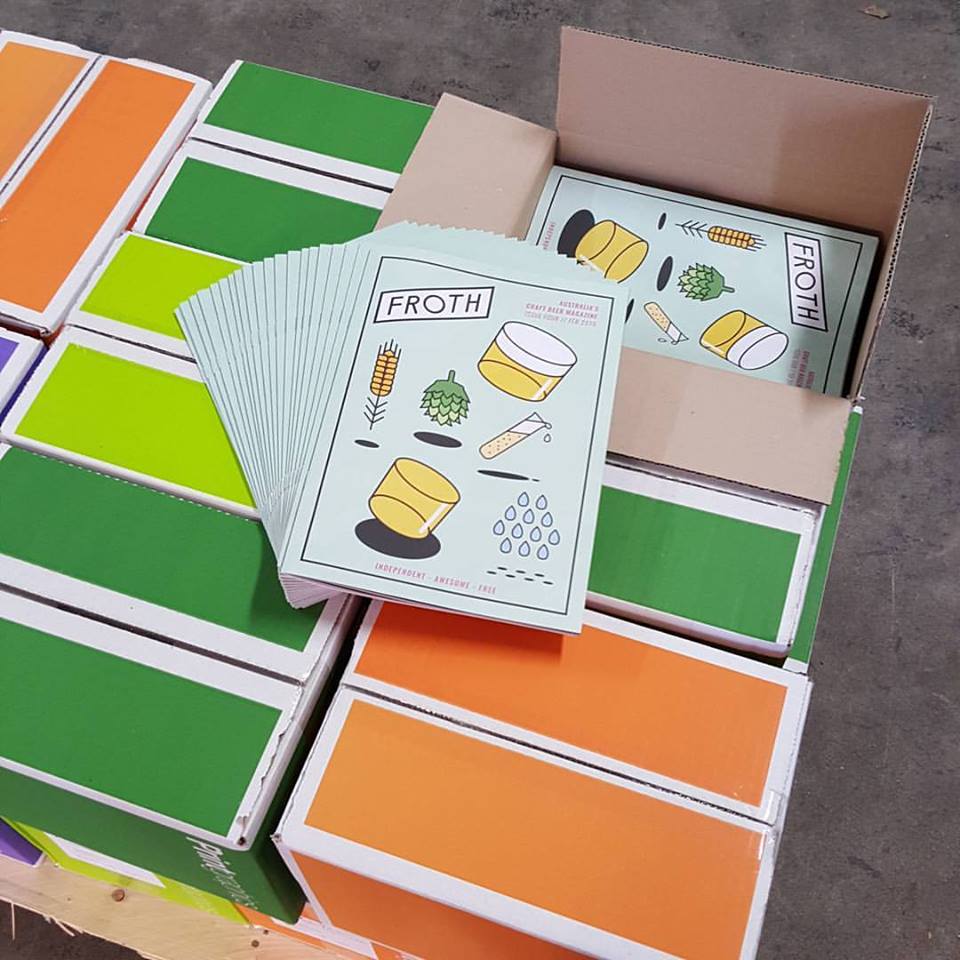 This is my latest article which has been written for new Australian craft beer magazine, FROTH. Enjoy!

The live sports fan experience has been undergoing a rapid and exciting transformation in recent years in an effort to bring fans back to the game as major sports teams and stadiums across the globe are addressing fan concerns such as poor quality food options, long queues and inadequate parking to public transport woes, expensive tickets and dirty or insufficient toilets. However there is also one key area that these clubs and arenas are working on to enhance the fan experience and that concerns improving the quality of the beer.

As a result of the high definition wide screen TV sports experience becoming so entertaining these days, sports businesses have had to work extremely hard to increase fans emotional loyalty and provide extra value and ‘bang for their buck’ in an effort to get fans off their TV’s in their sport caves and get their bums back into the stadium seats. While stadium technology like artificial intelligence and virtual reality activations, real time player stats and biometric fast track fingerprint ticketing screening to apps that show you the fastest moving toilet line and in-seat ordering are creative stadium innovations for sport fans, the one area that often gets the most gripe from fans is the quality or lack there of it of the stadium beer however certain aspects in this space are improving.

There are many exciting things happening at this intersection of craft beer and live sports to improve the fan experience and deliver deeper connections with fans. Teams such as the NFL’s Buffalo Bills and the MLS’s DC United have both brought out their own lines of pale ales for fans such as Southern Tier Brewing Company’s ‘One Buffalo Our Beer’ and DC Brau Brewing Company’s ‘The Tradition’ respectively. Major League Soccer team Sporting Kansas City also teamed up with Boulevard Brewing to release special brews on game days with myself being lucky enough to try their delicious Sporting Saison at a game in October.

Venues like the Dallas Mavericks and Dallas Stars American Airlines Arena in Dallas, Texas and Westpac Stadium in Wellington, New Zealand have recently introduced local craft beers to appeal to fans tastes and offer a wider selection of beer on match days. In the case of Wellington’s Westpac Stadium, which is the first stadium in Australia or New Zealand to offer local independent craft beers, the initial foray into local independent craft beer has been for Wellington Phoenix games this season with the beers changing for each event. The Stadium’s CEO and good beer fan Shane Harmon highlights that ‘craft beer was cited as the No.1 area in which we could improve the fan experience’ and points out that at the most recent event ‘we poured Garage Project’s Hāpi Daze (a Pacific Pale Ale) and Orange Sunshine (a citrus wheat ale) as well as Tuatara’s Outrigger (a Pacific Pale Ale), Pilsner & Helles’ with the feedback having been universally positive from fans.

Elsewhere, English football teams Burnley FC and Crystal Palace have both held beer festivals celebrating local craft beer varieties from Moorhouse Brewing and Cornwall’s Sharp’s Brewery while Reading FC have recently called on fans to name and brand their new West Berkshire Brewery pale ale to be sold in the stands. It’s these types of beer initiatives that have deeply engaged hardcore fans who love craft beer as well as the world game.

Back in the US and the New York Mets held an educational ‘beer passport’ event last year that featured plenty of New York brews from Brooklyn Brewery, The Bronx Brewery and SixPoint Brewery and was an added way for fans to get more bang for their buck out of the game while experiencing quality New York state craft beers. Major League Baseball’s LA Dodgers have also upped the game in terms of beer technology as they’ve created special technologically advanced ice cream type foam that sits on top of your cup of beer to keep it ice cold for 45 minutes.

In recent seasons in the US there’s been a big push for stadiums to feature better quality beers with NFL stadiums like New York’s MetLife Stadium featuring Captain Lawrence and BluePoint, Chicago’s Soldier Field serving up Half Acre and Goose Island and the Green Bay Packers Lambeau field pouring Hinterland and Badger State brews. In fact in writing this article I counted over 100 craft beers on offer at US stadiums. Throughout other US stadiums in-seat ordering and self serve craft beer machines have meant that fans avoid missing long periods of on-field action as beer lines are shorter (with colder beer) as well as the fact that beers can be delivered straight to your seat. Stadiums like the NFL’s San Francisco 49ers Levis Stadium have implemented in-seat ordering so that your beer can arrive ice cold without ever having to leave your seat while their mobile app can even show you which toilet has the shortest queue in real time when you need to relieve yourself!

For those fans who want to watch their beer calories at matches, Canada has manufactured a recovery ale sports beer called ‘Lean Machine’ that is being marketed as the perfect post workout beer as it only contains 80 calories and even had scientists backing it up by saying its no more harmful than a sports drink. Further to this if you’re the designated driver in your group of mates, then US stadiums are just for you as many teams like the New Jersey Devils and New York Jets give sober fans who sign up to drive their mates home a free soft-drink which is a good idea that could work here too.

Exciting developments are happening in Australia too as the SCG recently launched their Matilda Bay Brewer’s Pavilion bar featuring a special exclusive lager called Wagging Tale. Not to be outdone, Sydney’s ANZ Stadium has just openedThe Crossbar that features Kosciuszko Pale Ale amongst 16 other varieties of beer while also creating the James Squire Craft Beer Bar inside the stadium. Furthermore, with Mountain Goat and Little Creatures being recently bought out by Asahi and Lion Nathan respectively and with fans constantly demanding more value, we may well be seeing these fine beers or others at an Australian stadium soon.

So raise your plastic schooner cups sports fans and rejoice in the knowledge that your love and thirst for craft beers is finally being addressed by teams and stadiums across the globe and even here in Australia as they look to give us greater fan experiences each time we head through the turnstiles.

Blair heads up the Australian operations for audioBoom which works with major Australian and international sporting teams through to broadcasters and podcasters and has previously worked at English football club Queens Park Rangers and The Gabba sports ground along with a career in the education system and music industry. Blair can’t go past Stone and Wood’s Pacific Ale but is also partial to Feral Brewing’s Watermelon Warhead.