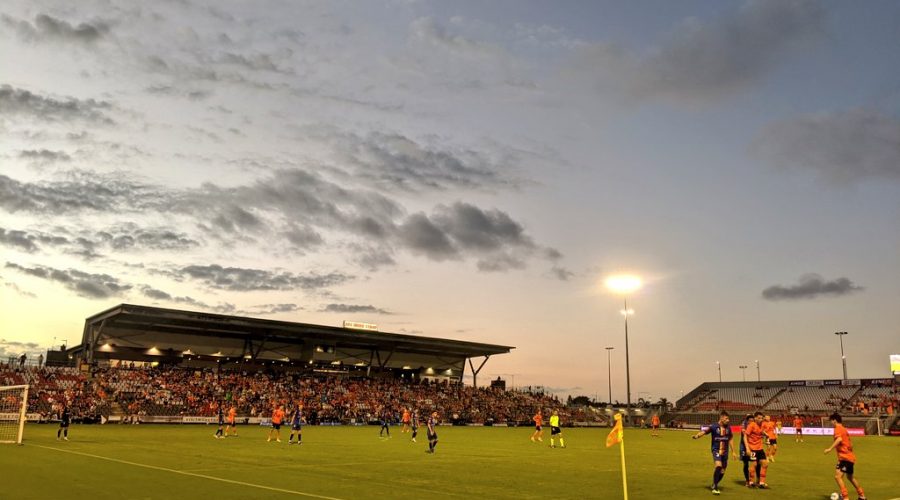 On a gorgeous blue sky sunny day in Brisbane I headed out to Redcliffe to take in the Brisbane Roar A-League match versus Newcastle Jets at the boutique and impressive Moreton Daily Stadium.

Driving from Brisbane today as public transport can be tricky with the closest train station to the stadium 2km away, it was very nice to be able to get free parking and walk 50m to the venue gates.

Before the match I went on the Moreton Daily Stadium website to plan my visit and while the website has had a good refresh especially with the hype reel video, it was disappointing to see that the events page had not been updated since February with no mention or information whatsoever on the match today. Some suggestions I have made to the venue include:

First impressions were not the best at the gate as they opened at 3pm with the ticketing line being divided into two lines however then diverting back into one. Everyone in the right lane who had signed into the venue and showed their vaccination pass then had to divert back in to the two people scanning tickets rather than those two gate staffers separating into scanning one line of fans each. Security were welcoming and said hello while gate staff also were helpful and while annoying this ticketing process still moved fans in quickly and the line kept moving. There was a map at the start of the venue along with the standard check in’s required by fans however it did not appear that the ticket scanners knew how to work the scanner as we were not scanned in and just allowed to walk in and witnessed other fans doing the same or just walking through without being scanned due to the crowd build up at the gates. Ticket scanners were doing a good job in the sun and these scanners can be tricky to pick up the QR codes so they did a good job to scan people in under the pressure of fans all coming in at the same time.

I said hello to the ticket scanner and they were kind and helpful and wished us a good day which was a positive start on entry to the venue. As I mentioned security here were really positive and I had some good chats to staff as I made my way around the ground. Good communication and positive staff make for a positive visit and from the F&B catering staff to the security you could see that the staff here were very hard working, attentive and offered good customer service skills.

There is so much to like about this venue with some of the cheapest food and beverages in an Australian venue and includes $6 beers, $4.70 chips and $2.50 lolly bags for kids and families which was a nice touch. They even have potato scallops while the meals are of a substantial serving and lines moved quickly from what I observed. The sauce is even free and while a small thing to some people, is the type of little touch that goes a long way especially when some venues charge $1.50 for sauce.

There are no bad views in this venue with each stand affording spectacular views of the field of play. The tall trees that stand behind the Eastern Grandstand just add a gorgeous touch to the charming styling of this boutique venue. Today I was in the Western Grandstand area which for $65 represented outstanding value with a full roast and ice-cream plus cash bar (with $6 beers and $3.50 soft drinks) and amazing views of the field. The best thing about the views in this venue are that you can watch the game from down on the sidelines and be right up close to the corners and nets and when I mean close, I mean close. The players are literally 5 metres away from you or less which just represents such an incredible experience. Accessible seating views are also impressive while on that front there are now lifts in the venue which means access and inclusion is even more at the forefront of what this great venue can provide to fans on event days.

It was great to see both the male and female Brisbane Roar mascots out and about as well as the merch stand in full swing. The Roar did a great job on the fan engagement front with kids games, cross bar challenges and their local community partner on the day doing a fantastic service for fans.

While no doubt that OWHS standards are high here I did witness a couple of incidents that made me question if it could be better. On my walk around the ground I saw a fan taking photographs of the players. As she bent down to lean on the fence she fell through it as this particular gate part was not locked or did not have the pin through it meaning she fell through and this could have been a lot worse for her falling on the LED boards or the pitch. Fans must also watch out for balls flying past the net as you make your way from side to side. I was surprised that there was not safety netting or security guards and signs at ether side of the nets warning fans to be aware of flying balls potentially hitting them pre-game as the players practiced their shots. You’d hate to lose your beer or hot chips here when walking past and I don’t think it’s fair that fans would know to be aware of this as they are pre-occupied on walking through to their seating area as well as the fact that the game has not started so they are not paying close attention to the field.

The way-finding signage is good here after some venue upgrades with clear signage and information displayed however the hand sanitiser stations scattered around the venue were empty which seemed like just one of those small things that was forgotten about from time to time on event days. When entering the Western Grandstand corporate area for our seating we had to get a wristband and as the staffer ripped the piece of paper off to stick the wristband on my arm he let the scrap paper just fly away. I said ‘someone needs to get you a bag for the rubbish’ and he said ‘nah fuck it, its just rubbish’. To some who litter or don’t care about the environment that’s fine but for someone like myself who is conscious of and cares about sustainability this was not good optics, especially in the corporate area with people watching. However, for sustainability it was good to see all the standard recycling bins but also a dedicated can and bottle bin for recycling.

Overall this was a fantastic fan experience with the views, affordable food and beverage and accessibility being the major highlights not to mention the last two goals from Brisbane Roar to seal a stunning 2-0 victory. Every fan should add Moreton Daily Stadium to their game day bucket list as it’s well worth the visit.