The following article appeared in Digital Sports Labs and can be found in full here.

There’s an entertainment extravaganza taking place in the fan zone outside the Melbourne Cricket Ground as the Big Bash League’s Melbourne Stars play host to the Sydney Thunder on a hot and humid night in Melbourne.

At first glance, it appears the Melbourne Stars team have thought of all the standard game day fan engagement touches that we’ve come to see around our Australian venues, but have then added a few surprisingly creative additions that represented an added highlight for kids and families.

Having taken the tram today, it was good to instantly view prominent way-finding signs directing fans to transport and stadium access points while the atmosphere and vibrancy was loud and vocal on the approach to the fan zone.

Before the game, fans were able to create and customise their own ‘Starmoji’ character on the Stars’ website which was a hit with the kids (and this writer’s fiancé!) as well as download their augmented reality app to scan AR markers on murals around the venue.

This was a clever activity for families to partake in as the AR app enabled fans to collect the full series of markers thus creating a type of scavenger hunt around the venue and making blank concrete spaces come alive. It’s going to be very interesting to watch the AR space develop as venues and teams turn previously unused stadium spaces into new and exciting opportunities for fans to engage with.

The crowd is pumping outside the ground an hour before the first ball with a colourful song and dance area, colouring-in stations and face painting all providing a plethora of activities and ways to pass the time before heading into the ground. An impressive feature outside gate 4 was also the ‘first timer’s’ stand where fans could pick up a scorecard showing how cricket works and other game day information.

The kids zone seemed endless with both a Nickelodeon site on the Yarra Park side of the G while another area with inflatables, slides and kids activities featured on the other side of the ground that kept families entertained while the ground stickers featuring team member names of both the WBBL and BBL players scattered around the stadium added more colour and design to spaces rarely used on game days.

Photo opportunities seemed endless with a variety of options such as a size me up stand, a chance for fans to have flames appear in their pic with the stadium background and a hashtag ‘S_ARS’ team green cut out where fans were able to use their arms to make the ‘T’ for the photo. A further walk around the MCG saw skills drills stations with bowling and batting practice and the addition of a bubble machine.

Upon entering the MCG all fans were able to grab a few freebies like ‘boom boom’ inflatable sticks, a pair of Stars butterfly wings as well as 4, 6 and dot ball cards (a clever idea for when the team is fielding) which were keeping families and kids smiling ear to ear.

The quality event presentation aside, the game day production and screen content inside the G was an eye catcher as the hype reel countdown, oblivious cam and the inclusive way that they had a person doing sign language on the screens for the game day announcer were all very impressive to witness throughout the match. A dance crew roamed the outside of the boundary rope jumping up to perform after every big moment while the pyrotechnics lit up the crowd, especially those in the unique party deck seating in Bay 13. 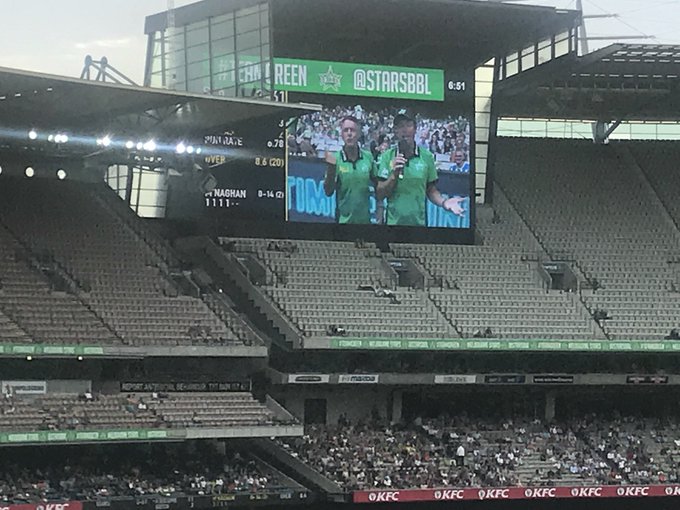 The fast-paced fan engagement ripped through three sponsor’s activities in about 15 minutes with a dash for cash and crowd chant ‘noise off’ getting many laughs however the t-shirt gun operator might need some more training based on the fact one tee was fired into an empty stand and another hit sponsor signage before plummeting to the stand below, however, both shots still generated good-natured laughs from the crowd.

While every major venue across the globe are working on ways to get fans into venues earlier with creative incentives that drive further revenue and more eyeball time on sponsors there can be no denying that the BBL and BBL teams like the Stars go above and beyond to create impressive action-packed fan zones that offer quality and quantity in terms of fan engagement activations. This emphasis on variety actively encourages more families to attend well in advance of the match start time simply due to the overwhelming array of fun to be had pre-game.

A spectacular set up from the Stars that focuses on the little things fans want, a dash of technology and then some added surprises to light up the game day adventure.