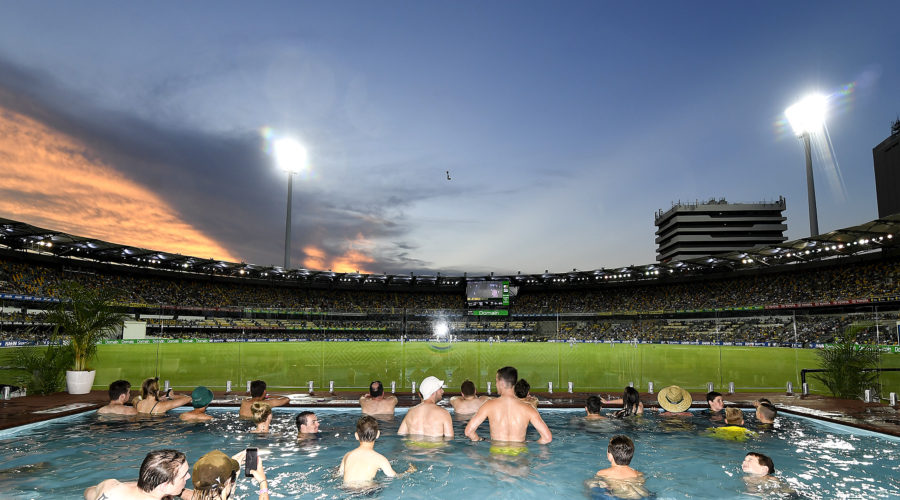 Across the globe the sports business continues to face many challenges to get bums back into stadium seats both as a result of the competition from the at-home TV experience and new leisure activities combined with the fact that audiences have evolved and are seeking more bang for their buck on game days.

To combat this, teams and venues are constantly creating innovative fan engagement solutions that are seeing positive outcomes for all stakeholders. Whether it be technological advancements such as Manchester City’s augmented reality game day program, the proliferation of craft beer amongst venues concession offerings or Celtic FC initiating the inclusive approach of providing female fans with free sanitary products at Celtic Park, the in-venue fan experience globally continues to be rapidly transformed and enhanced for supporters on match day.

One example of a sporting organization who are reaping the rewards of following a fan first approach is Cricket Australia whose events have consistently demonstrated best practice fan engagement which has afforded cricket fans with exceptional experiences that go above and beyond, particularly with regards to unique money can’t buy activations. This fan experience review of the recent first test match from Brisbane will therefore provide an insight into Cricket Australia’s approach to fan engagement and explore the lessons that other sporting organisations and venues can learn to ensure that all patrons have a positive game day fan experience.

Starting and ending the fan journey seamlessly is integral to a positive fan experience and it’s something that Cricket Australia and Stadiums Queensland, through The Gabba, do very well as all fans are entitled to free public transport to and from the ground on Cricket Australia match days. Taking advantage of this I boarded a Council bus at 11am from the suburban outskirts of Brisbane that took me all the way up to the front gates of the famous cricket ground in turn saving $5.80 on transport costs. As a result of this integrated transport ticket offer, fans were able to enjoy a clean, air-conditioned and fast ride to and from the ground with ease while also saving some money which is always a quality way to start any match day.

Arriving at the Gabba 90 minutes before the first ball on what was a typically hot and humid Brisbane summer’s day it was instantly impressive to see the fan zone set up complete with it’s pumping atmosphere and colourful event presentation that featured Cricket Australia branded test match banners that were adorning the Gabba gates.

Security personnel are often the first match day event staff that fans interact with when entering the venue so it is vital that a positive interaction sets the tone for a fan having an enjoyable experience and this was evident at The Gabba on this occasion. In this heightened security climate it was good to see that the event was well aware of not making this feel like a ‘security event’ as fans were greeted with a friendly smile, welcome and hello from security staff who were present at the gates wanding down patrons and checking fans bags before entry.

On the technology front both Cricket Australia’s ‘Matchday’ app and Stadiums Queensland’s ‘MegaFan’ app provided fans coming to the game with all the information they needed with handy fan experience features including venue maps, live transport timetables and seating views to video replays of key moments and score updates from the game all of which helped to ensure a positive experience for every fan.

Cricket Australia places a large emphasis on fan engagement with regular quirky trivia questions on the big screens as well as a sideline-seating feature, which sees a roving group of lucky fans selected to sit in their own exclusive section on the field behind the boundary ropes. The addition of the roving face painting ‘Colour Crew’ was also a clever feature of the game day fan engagement offering that enabled them to move around the ground and paint the faces of Australian and Sri Lankan fans throughout the day.

The centerpiece of the fan engagement offering here however is the impressively presented “Cricket Australia Pool Deck” which represents a unique fan experience in terms of the atmosphere and excitement that it generates for fans.

Designed in conjunction with sports agency TLA Worldwide, the “Pool Deck” activation allows close to 500 fans over the course of the day to cool off in the pool and sees fans first sign a safety waiver at the registration desk where they are presented with a free tropical towel to use as well as a wristband before they enter the pool’s sparkling water to cool off and enjoy an unrivalled view to take in the action on the field.

TLA’s senior account manager Cameron McFarlane noted that “Cricket Australia’s plan with the pool was to appeal to new and existing fans, giving them another reason to attend matches at the Gabba, creating an exceptional experience that would reward the existing fan base as well as creating memorable experiences for new audiences at the cricket. The tiered seating and shaded lounge chairs result in the best seats in the house, aligning with Cricket Australia’s strategy to facilitate social interaction for fans to enjoy throughout their day at the cricket in an accessible environment.”

The little touches were also evident everywhere in the “Pool Deck” with exquisite event presentation and fan experience features including abundant shaded areas and tables, deckchairs, tropical plants and colourful cushions, sunscreen, phone charging and most importantly the incredible views from the deck which are quite simply right up there as the best spot to watch a game from in at any Australian stadium.

As a result of a devastating dought affecting many parts of the country especially in Queensland it was inspiring to see the focus that Cricket Australia put on raising awareness and vital funds for drought stricken farmers especially as the annual Brisbane test match attracts so many people from the bush. The rural focus included volunteers collecting donations for Rural Aid, a mechanical bull ride for kids of all ages to have a ride on as well as a live site that featured a giant TV screen and numerous hay bales for fans to sit on all of which made for a pleasant family friendly feel outside the ground. Even more impressive to hear after the test match was that Cricket Australia repurposed 25,000L of water from the pool to a Queensland dairy farm that had been affected by severe drought.

Cricket Australia’s test match hospitality offering at the Gabba leaves other sporting codes in its wake with a variety of options available to entertain fans at the match. An example of this is ‘The Century Lounge’ fan experience in the Gabba’s Legends Room which was an exceptional experience not least for its delectable culinary offering but also because of the creative and useful gifts that each attendee received. In a sporting world where sponsor’s fan engagement activations are often cheap and useless items that are given away to fans it was impressive to see that the focus on quality and creativity with fans here receiving wood framed sunglasses, a test match wool kit stubby cooler as well as a Cricket Australia branded USB phone battery charger all of which were both memorable and bound to be reused again and again by these cricket fans.

While the Gabba faces increasing pressure from fans to upgrade its facilities to rival other Australian venues, it was positive to see the new additions and diverse range of gourmet food and beverages which were on sale some of which included an Asian food cart selling dim sims and pork buns as well as the new Gourmet Grill that offered vegetarian curries, pork belly burgers and loaded fries. Chilled slushies and fruit smoothies kept fans cool while the ‘Parma for a Farmer’ chicken parmigiana meal deal was a creative and effective community minded approach to raise funds for Queensland’s drought affected farmers.

With sunscreen often being expensive, forgotten to be brought in to the stadium or even applied by fans in the first place it was good to see that both Cricket Australia and the Gabba are always putting its fans first as free sunscreen stations were scattered throughout the ground to ensure that fans were protected from the sun’s harsh over a long hot day one at this test match.

Cricket Australia’s test match experience at The Gabba highlights an exceptional example of best practice fan experience that delivers consistency, value and quality in every facet not least as a result of it’s creative fan engagement activations, community initiatives, hospitality options, addition of smart extra touches as well as simply providing fans with the key information that they need to have a positive experience at the venue on match days. 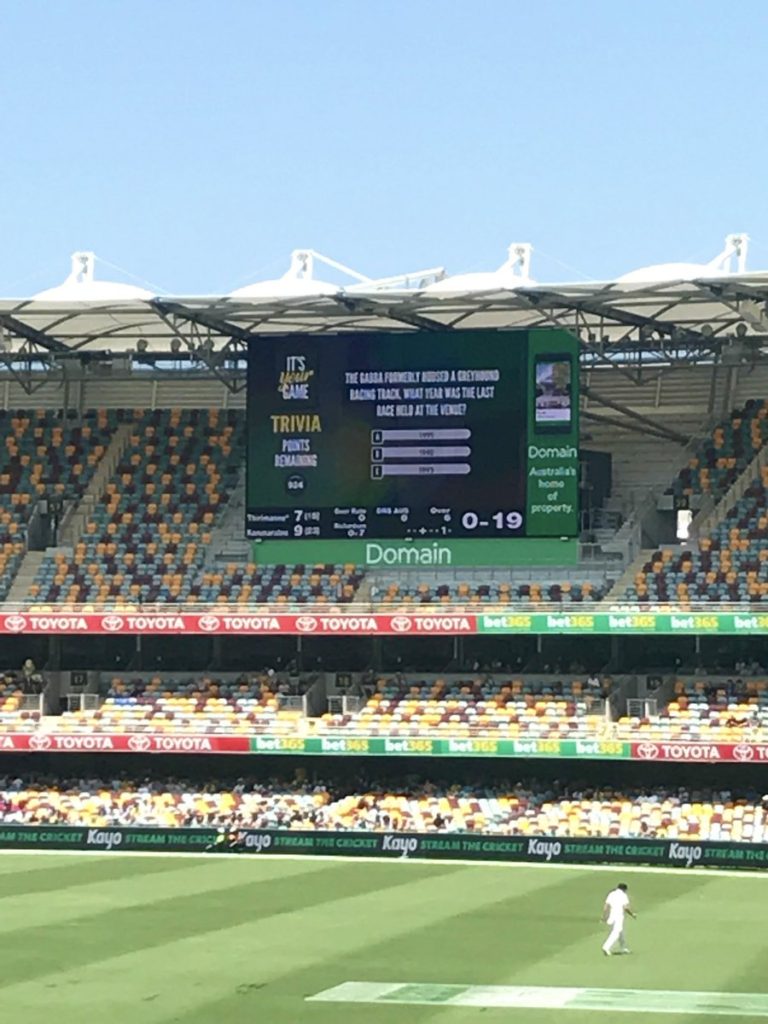 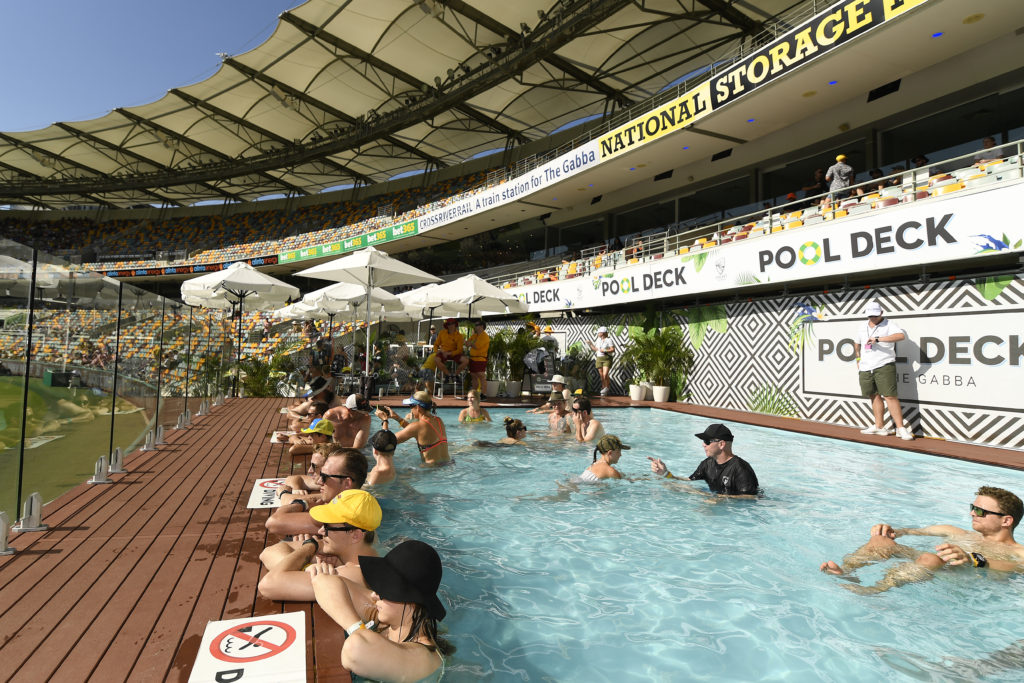 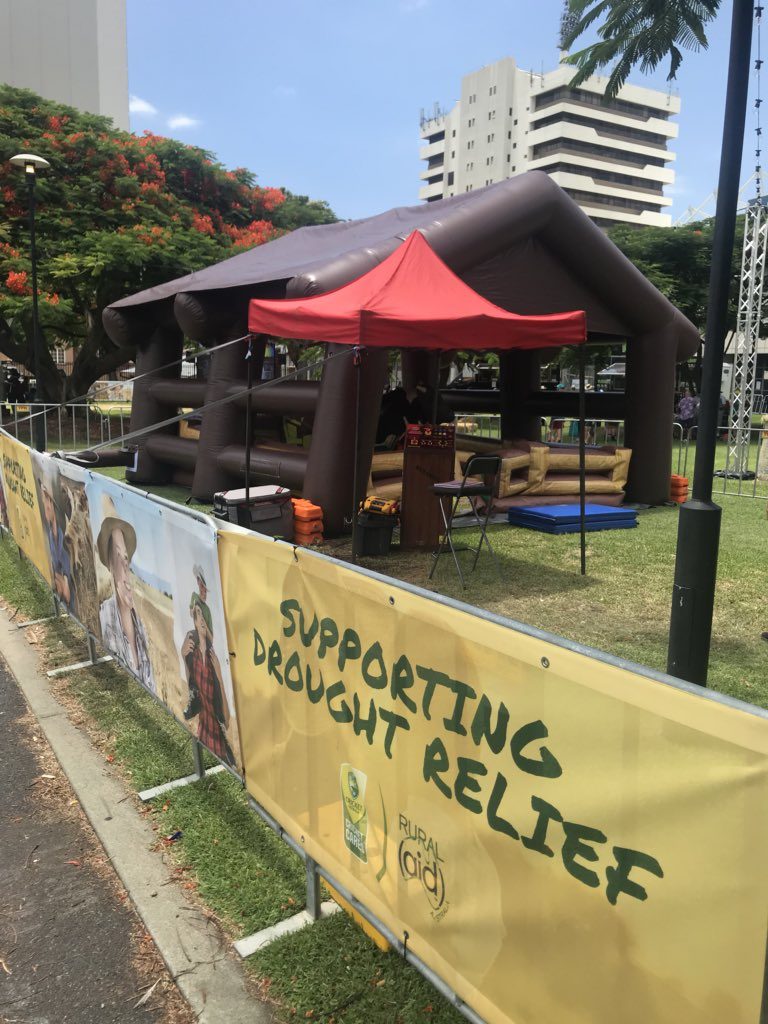 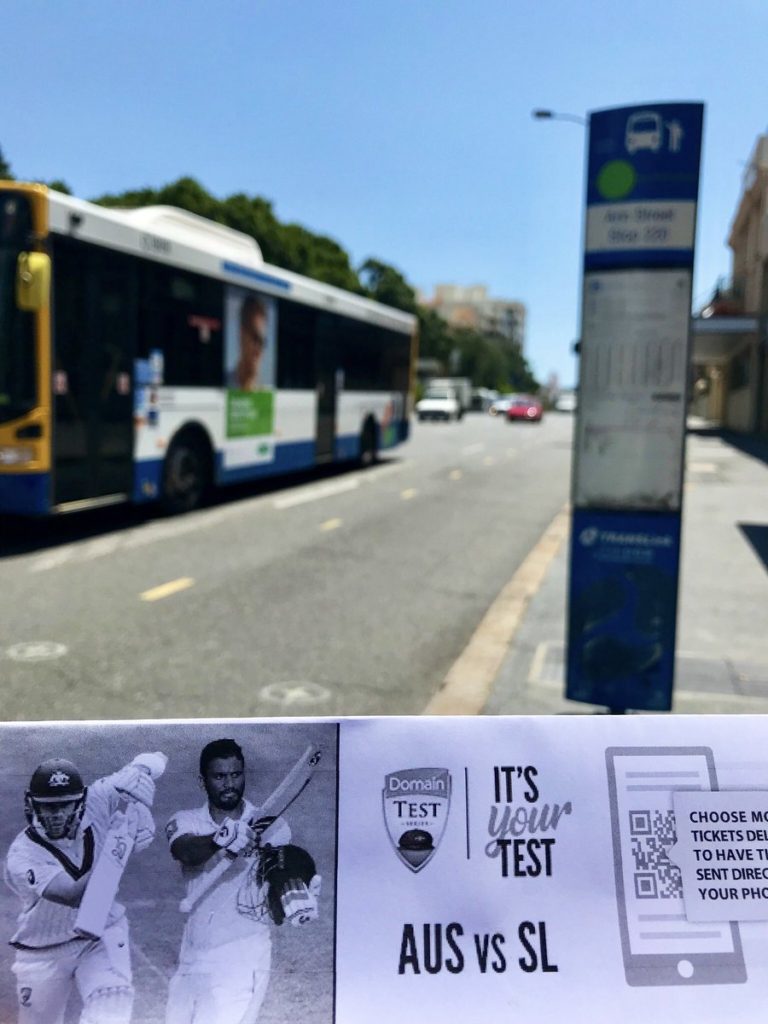 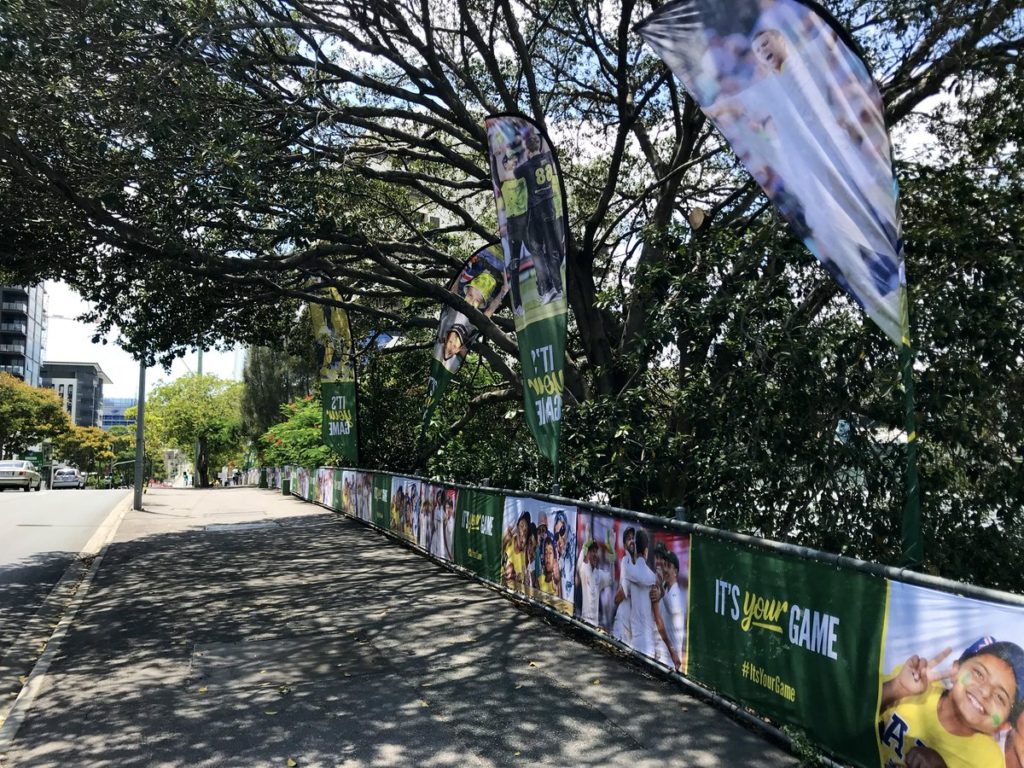 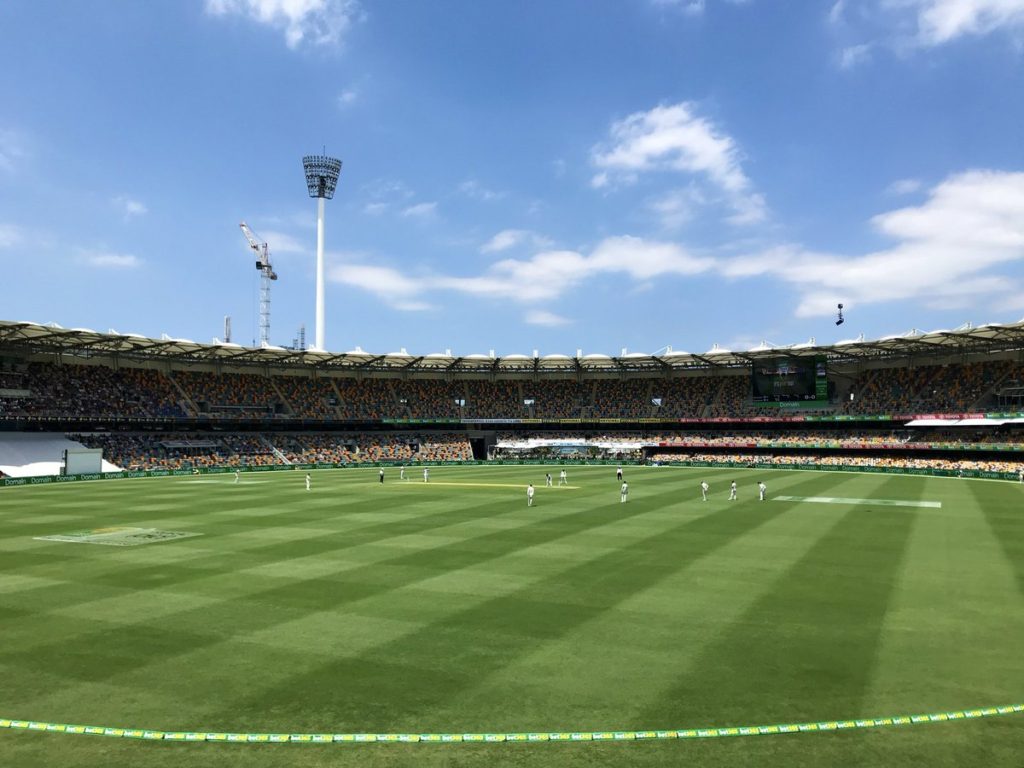 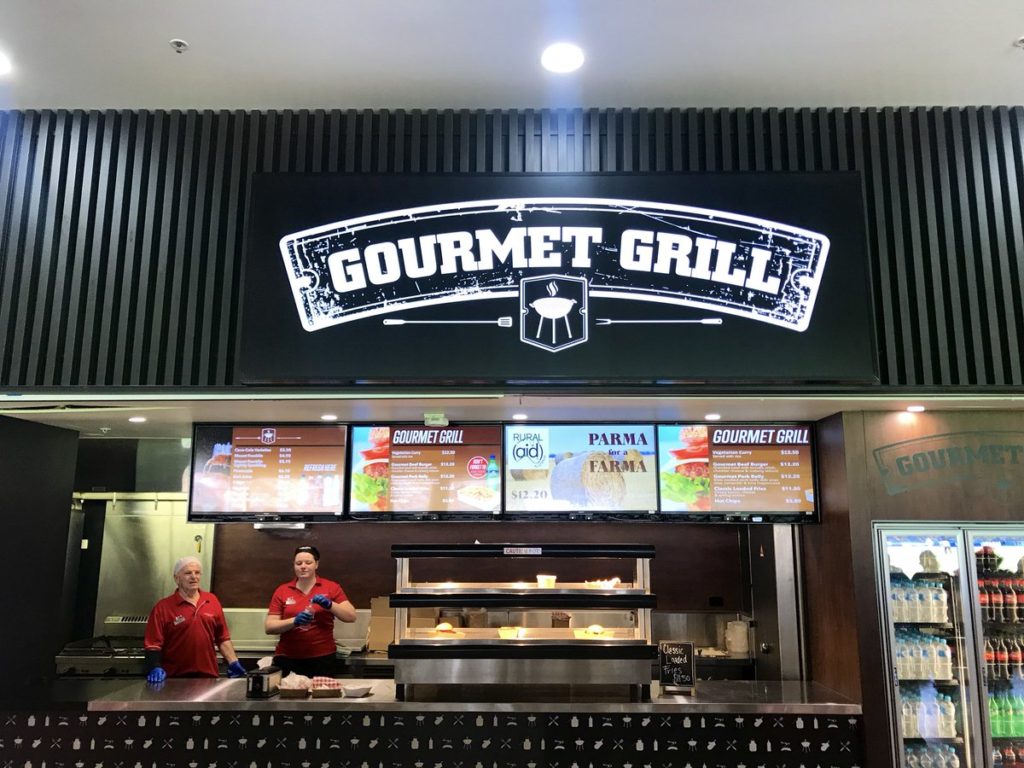 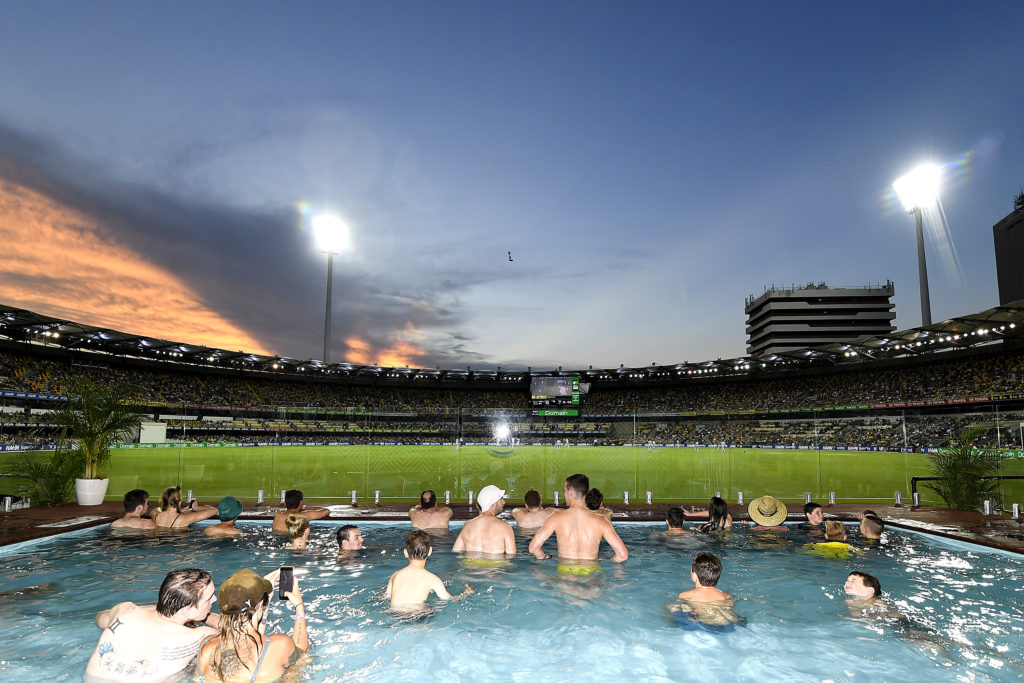 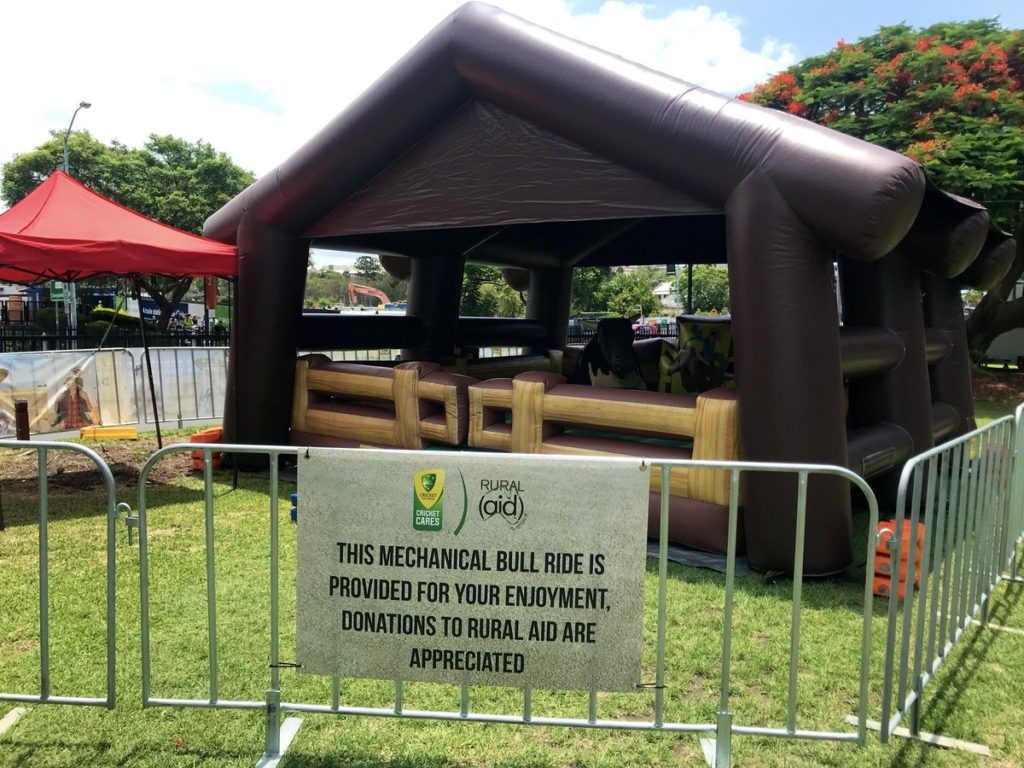 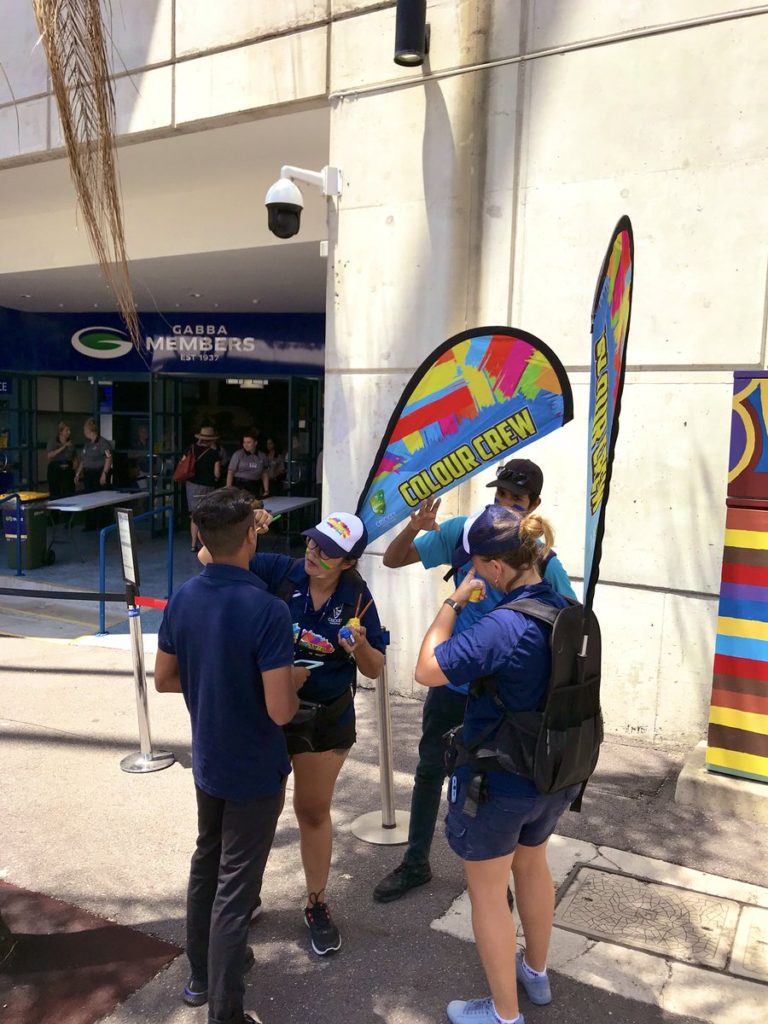 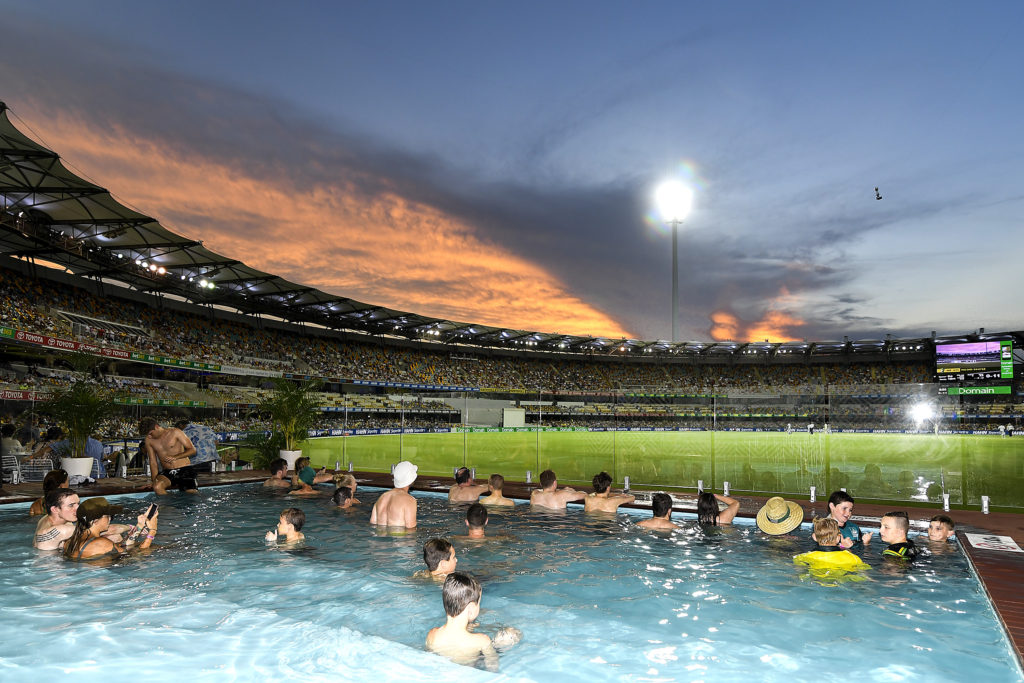 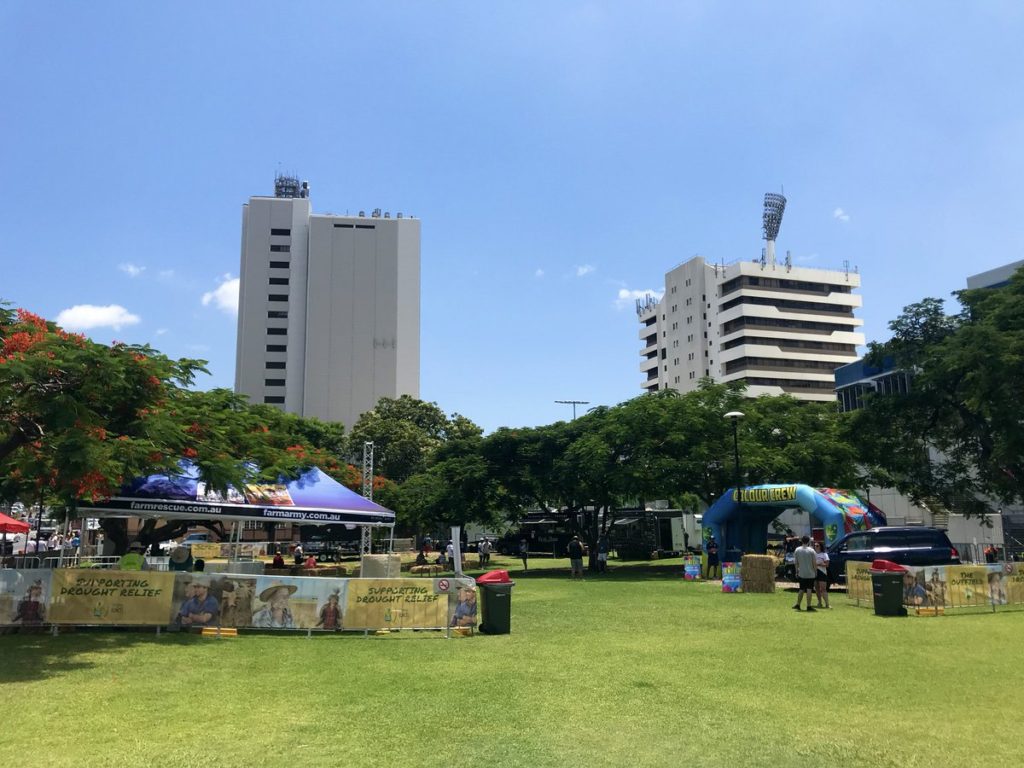 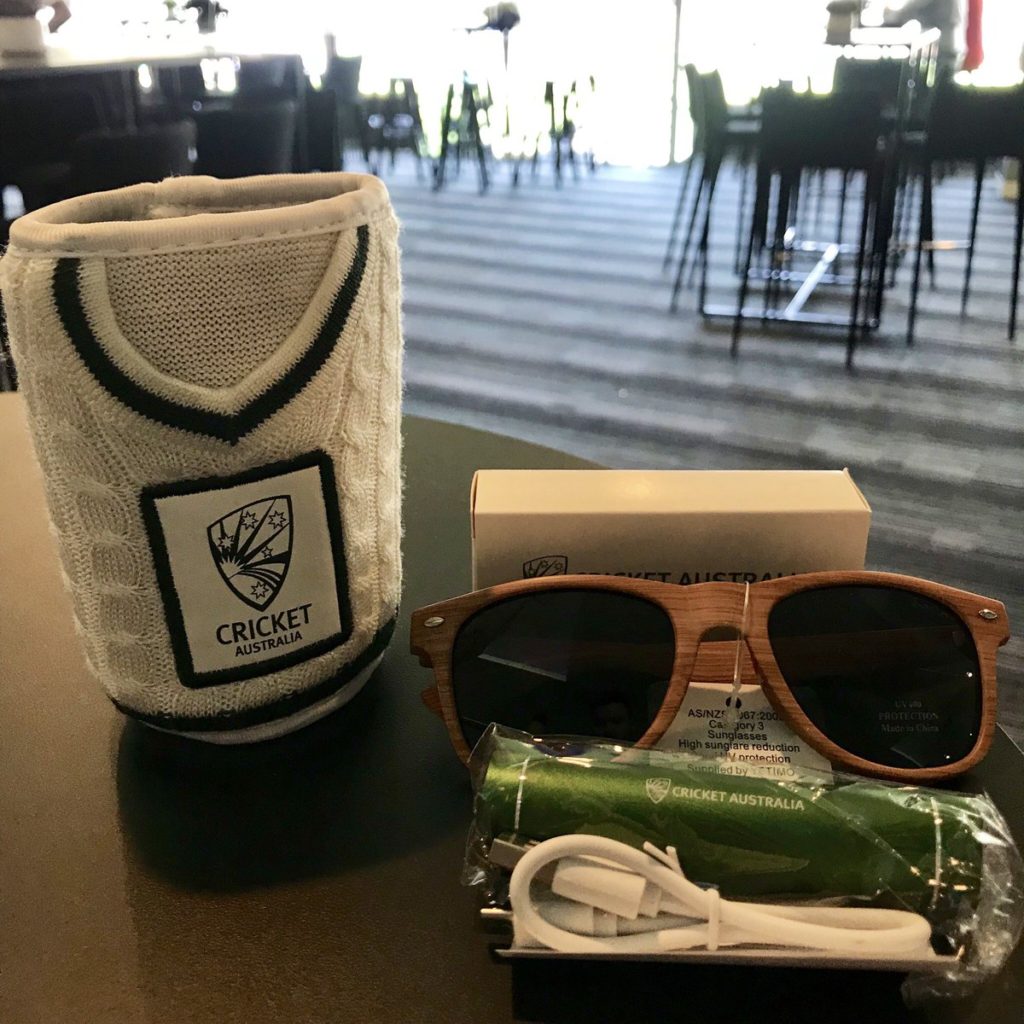 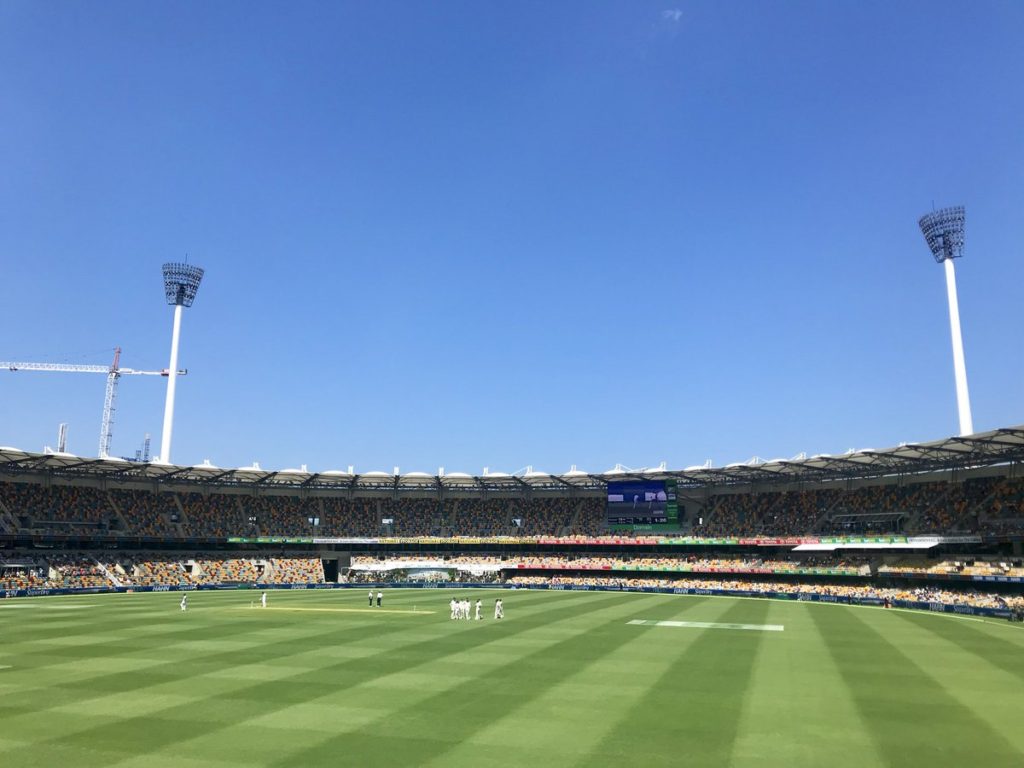 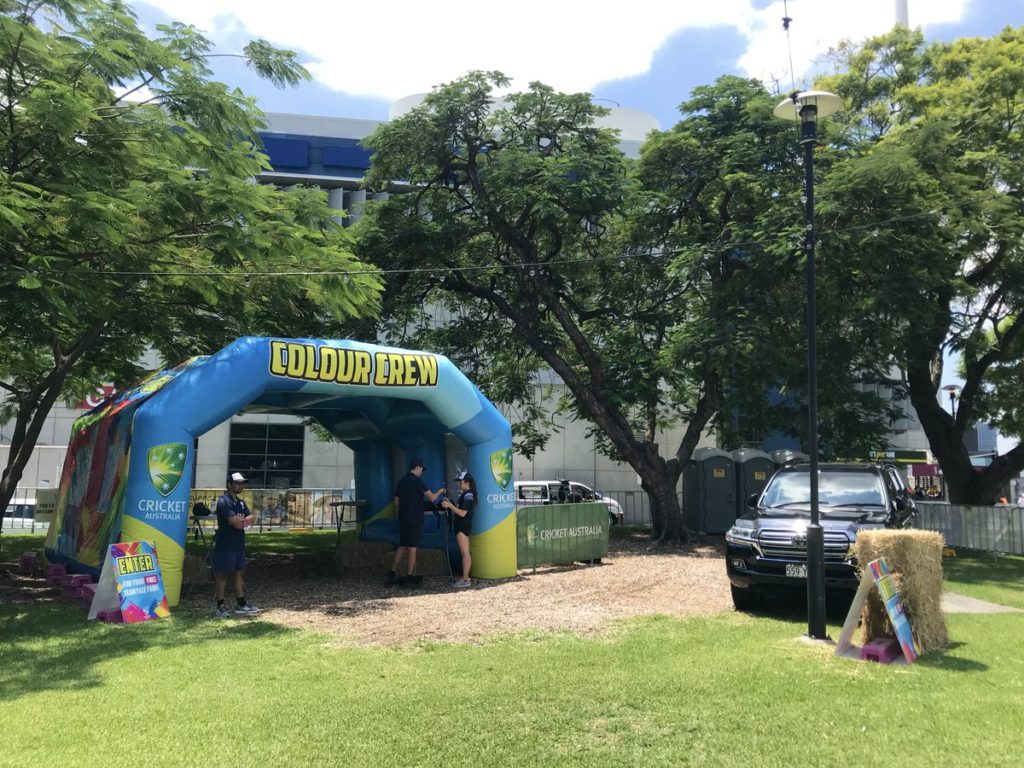 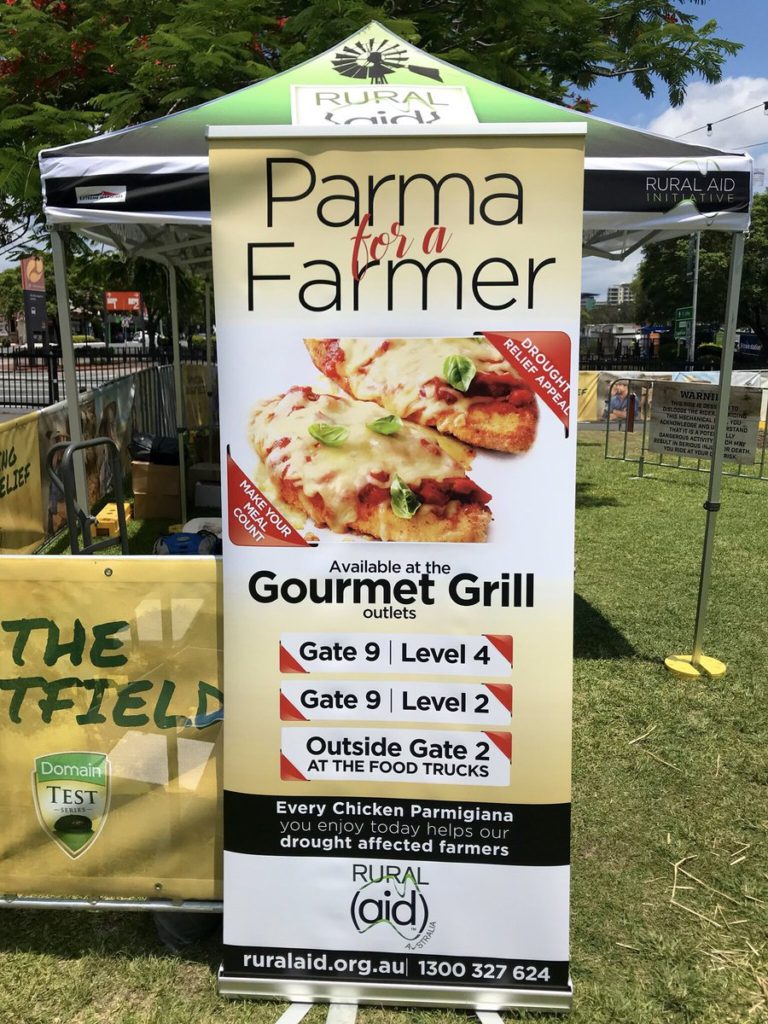